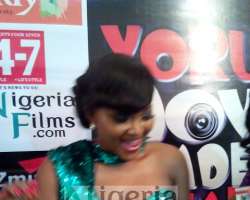 The ancient city of Ibadan, Oyo State is presently in a joyous mood as heavyweights in the Yoruba film industry are at the Ibadan Civic Centre in Agodi for the Yoruba Movies Academy Awards (YMAA).

Residents of Ibadan are happy that YMAA is gathering such galaxy of movie stars in the city. The venue of the occasion is filled up and more people were seen outside trying to catch a glimpse of the awards.