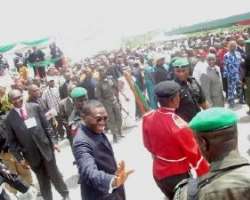 Following the charged political climate in Anambra State, it has become very easy to spot a new style of politicking among politicians which has gone beyond strategizing to rig or to lobby the Presidency or INEC to presenting credible candidates whom each of the parties believe will win votes for them. It is no longer a question of hiding behind one godfather somewhere or a question of 'we formed this political party' or 'when did you join', which has always been considered before candidates are chosen. Even when the godfathers are still part of the picture, it is no longer enough to hide behind the strength of their bank accounts or the force of their endorsements. Today, governorship candidates appear to be chosen based on three major yardsticks: incumbency, credibility and past records. These three yardsticks can easily be spotted among the three major political parties in the State: APGA, PDP and AC. The party that is not, for instance, favoured by the power of incumbency always tries to make up either by the credibility of their candidate or his past record.

Before we go into the analysis of how each of the three major political parties in the State has weighed its options based on the three yardsticks, it is good to point out that this change of strategy may be a signal that politicians have started taking the Anambra electorates seriously. The events of the recent pasts may have signalled to them that Anambrarians are no longer ready to tolerate impositions or sell-outs. Inasmuch as these may still exist within the political parties themselves during the primaries, they may not be allowed to extend to the general elections.

Back to the political parties and their individual strategies, everyone knows that APGA's Peter Obi enjoys the power of incumbency as an advantage. As one who controls the State media, he can always use it as a platform to sell his candidacy and talk down on other candidates to raise doubts about them in the minds of Anambrarians. But the other candidates can also challenge this, if excessively done, by complaining to the Nigerian Broadcasting Corporation to restore balance to cross party media coverage. Obi's credibility was not questioned when he contested in 2003 as Anambrarians saw in him, a decent politician they can always build their trust on though he was barely known prior to his declaration of interest in Anambra governorship. He also came to spotlight at a point when the then governor Mbadinuju has run out of favour with Anambrarians and was becoming increasingly unpopular. Peter Obi made a huge political capital out of Mbadinuju's non performance which gave the electorates no time to study his personality because, just like some commentators said, anyone would have enjoyed such wide acceptance from Anambrarians just for Mbadinuju to be shown the way out. As for his past record, Peter Obi every now and then flashes the successes he made in his business as evidence that he could deliver on his promises.

However, in spite of Obi's incumbency advantage, it is obvious that so many odds have continued to weigh against his return to the Anambra Government house. Not only that he has the PDP dominated house of assembly to contain with, and the now shameful and protracted fracas within his own party, his tenure has come under close and intense scrutiny from Anambrarians and many of these have not been favourable. Initially he was accused of slowing down the pace of development that Chris Ngige initiated before he was thrown out of office. Obi quickly argued his way out and found an excuse that he was yet to settle down in office. The time he begged to settle down became an opportunity for him to engage in media war with his predecessor over what was left and what was not left in the Anambra State coffers. When it dawned on Obi that Anambrarians are more interested in him starting work immediately than questioning the stewardship of his predecessor, he quickly gave up the fight.

It was not long before Obi found another reason to give to Anambrarians to justify his slow pace- his now nullified impeachment. He quickly blamed the opposition for not allowing him time to work. It was not long before Anambrarians discovered that Obi is a man who is always more interested in giving excuses for his non performance and always tries to justify every failure by looking for someone to blame and fight. He fights the opposition, fights his deputy and blames the Anambra elites.. All these have continued to negatively impact on his credibility.

Most of Obi's policies and style of governance were not spared of criticisms. He is accused of making so many unsubstantiated claims. He claims to be the only governor that has invested hugely in education and Anambrarians quickly picked up on that and questioned how a governor that claims to value education will doll out a mere two million naira to each community to build schools as against the over 4 million he paid to pick up a mere governorship nomination form. He claims to be the only fiscally responsible governor but doubts were also raised about how a governor that makes such a claim could hand out cheques to private individuals who claim to lead town unions to re-build schools without any guarantee that the money would be used for the intended project, neither was there a study to establish what could be achieved with the N2m, or how many schools in a ward can benefit from getting the money; or that the money will be accounted especially as when the cheques were not even in the names of the recipients. Obi also claims to be running a transparent government when earlier this year one of his aides was found with a whopping 250million State money on a Sunday travelling from Awka to Lagos, in an official car in the Governor's convoy. So far Obi's aides have proffered at least six different, but unconvincing explanations on why such a huge sum of money could be founding cash in the convoy of a Governor who was a banker, and who likes to reap political capital from a presumed clean image. Some people believe that the money intercepted was not a one off, but a monthly ritual each time the state receives its allocation from the Federation Account, but that Obi merely ran out of luck on that fateful day.

As part of the new political strategy, Action Congress quickly decided to capitalise on Peter Obi's dwindling credibility and reputation among the Anambrarians and are hoping to make a huge political capital out of it. Having opined that Chris Ngige still enjoys a considerable level of acceptance among the Anambrarians due to his past record, he was quickly recalled from the United States and was handed the governorship ticket by his party almost unopposed.

Chris Ngige became a governor in 2003 under controversial circumstances. He is widely believed to have been rigged into office by his erstwhile political godfather, Chris Uba. He ran out favour with Uba and an intense fight for supremacy ensued between the two which later led to Ngige's abduction.. In the course of the fight and in a desperate bid by the two warring parties to pull down the other, so many shocking revelations were made which left Anambrarians fuming about the character of those who were governing them. Among the revelations which Ngige admitted and which soiled his credibility was the Okija shrine saga where he claimed to have gone to swear loyalty to Chris Ubah, but was armed with his bible and holy water. As Anambrarians questioned his morality to occupy the office, Ngige shamelessly engaged in a legal mandate defence tussle with Obi who was later declared winner of the governorship election. His credibility and reputation became all the more doubtful.

However, Ngige was able to turn things around by embarking on one strategy of developing road construction networks. The strategy made him an instant hero as Anambrarians who have for years been victims of bad governance were able to interpret Ngige's strategy as totally unprecedented and therefore did not waste time to take sides in the battle of wits between Ngige and his godfather, Chris Ubah, who was suspected of being backed by the powers that be. . Though still nursing the grudges against Ngige's moral bankruptcy and the corrupt system that threw him up, Anambrarians still tolerated him until he was shown the way out by the Court of Appeal.

As APGA was banking on the power of incumbency and the Action Congress banking on Obi's dwindling credibility and Ngige's past record, PDP seemed to have been skimmed out and was not seen as a serious contender due to the credibility and past records of her previous candidates which have left nothing to be desired despite their huge control of the State assembly. Anambrarians viewed PDP as a party that has committed the worst crime in the State since its creation and no one ever believed that the party will ever resurrect again. The reputation of the Ubas' in the State whom Anambrarians believed the PDP has sold the Anambra Government house to, did not help matters. For many, PDP is gone and, gone forever.

To the surprise of many Anambrarians, PDP quickly went back to the drawing board and appeared to have come up with a strategy that could pay off. They were ready to sacrifice the Ubas' and other big names within the party in the State if that is what it takes to win back the trust of Anambrarians. They dramatised their primaries with very many intermittent suspense that left everyone wondering what would be their next line of action.

As PDP was acting out these dramas, other political parties seemed to have suspended their campaign and started scrutinising the over 40 PDP candidates to access the level of threat each one of them posed to their interest. To their utter disappointment, PDP seem to have made a choice that threw up an atmosphere of panic following their nomination of Chukwuma Soludo.

Until his nomination, Soludo was the immediate past governor of central bank. He was known in the State as one of the finest brains around, as UN Secretary General chose him amongst the wise men to fix the global financial system when the world banking crisis was at its worst. Among other candidates, Soludo was seen as one who has the greatest exposure both nationally and internationally and his past record leaves no one in doubt that he has all it takes to govern Anambra State.

However, Soludo has got his own hurdles to cross. Not only that his nomination frayed some nerves within his party, with most of the aspirants vowing to work against the party during the general election, his tenure as the CBN governor which many hailed as hugely successful has come under media spotlight lately, raising some doubts about his level of complicity in some allegations. From the look of things, it looks very likely that Soludo is ready to shame his critics and has vowed to defend himself of every allegation. Uniting the different interests within his party will be one of his greatest challenges, and the way he handles it will tell a lot about his candidacy.