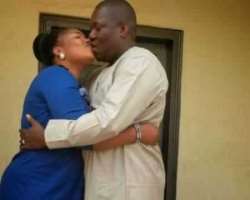 Nollywood actress, Laide Bakare has decided not to reply the rumours making the rounds that her husband is being wanted by the Economic and Financial Crimes Commission (EFCC).

According to reports, Laide's hubby Muttairu Babatunde Orilowo, has been declared wanted by the Economic and Financial Crimes Commission (EFCC) in connection with a case of criminal conspiracy, obtaining money under false pretences and stealing.

Several efforts made by Nollywoodgists.com to contact Laide on this issue proved abortive as the actress did not respond to her calls.

Until last year, Laide was married to her US-based ex-hubby, Olumide Okunfulure, whom she claimed was the father of her first born.

Despite the viral wanted claims by EFCC on Muttairu Babatunde Orilowo, the report is yet to be published on EFCC's website which leaves media wondering how true the story is.

Well only time will tell.