NATIONAL UNITY SHOULD BE EVERY NIGERIAN BUSINESS - MADUMERE

By OFFICE OF THE DEPUTY GOVERNOR, IMO STATE 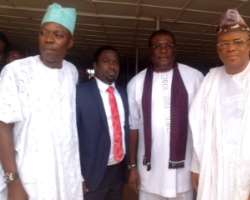 Imo Deputy Governor, Prince Eze Madumere, last Saturday, in Ondo State said Nigeria's unity cannot be compromised. He observed that the success of Nigerian project lies with the effort of the citizenry.

Speaking in Ondo town during a wedding reception of Mr. Eyitope Kuteyi of Channels Television and his heartthrob, Damy, he commended the groom for his professionalism and advisory roles to State government.

Consequently, Imo Deputy Governor submitted that it is the good nature of the groom has brought him to Ondo State and will always visit whenever he deems fit. He also told the people that Ondo born Journalist is an adopted son of Imo State.

Imo Deputy Governor averred that his boss, Governor Owelle Rochas Okorocha, as a detribalized Nigerian born an Igbo man, raised by the northerners and empowered by the south westerners. He also described Imo number one citizen as one of the few greatest patriotic Nigerians who will at all cost defend the unity and cohesion of Nigerian State.

He blamed the song of ethnicity and tribalism, which he described as the bane of Nigeria's development, on selfish desperate politicians who play up the strange phrases as a means to securing whatever electoral proceeds.

Asked on the way forward, Prince Madumere proposed a reorientation of our people praying leaders to talk less about the ethnicity while asking for abolishment of citizenship-indigeneship dichotomy.