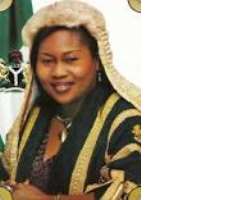 All is not well with the Speaker, Anambra state House of Assembly, Hon. Mrs. Chinwe Clara Nwaebili, as her colleagues prepare to replace her.

Why? Is it because of her gender? No! That isn't the reason. The battle may not be unconnected with power rotation.

The Lawmakers have resolved to shortchange Speaker Nwaebili because the state Governor, Chief Willie Obiano who took over the mantle of leadership last week Monday is from her Zone. The speaker hails from Ogbaru local government area which incidentally falls at Anambra-North senatorial zone. Governor Obiano also hails from the zone. He is from Anambra East council area.

Similarly, APGA Party chairman, Chief Mike Kwento, Secretary to the state Government Sir Oseloka Obaze among others are also from the North, while the Chief Judge is from the Central, only Anambra South seemed to be mute in the state governmental affairs.

Recalled that Anambra state joined the leagues of people clamouring for power rotation despite been dominated by one ethnic nationality and language (Igbo). This began since the Former Governor, Chief Peter Obi called for Governorship position to be reserved for the North due to their inability to produce same since inception of the state.

It was authoritatively gathered that members of the state House of Assembly from the South Senatorial district of the state are now scheming to take over the position of the speakership as they currently lack slot in the government.

According to our source, members of the House of Assembly from the South senatorial district held a meeting shortly after the change of leadership in the state last week and resolved that a prominent female lawmaker from the south zone should replace Mrs. Chinwe Nwebili as the speaker of the House.

'So when next the House reconvenes we shall make our case to the House and ensure we change the leadership of the House to reflect the reality on ground'.

Reminded that at a time, former governor Obi and former speaker of the House of Assembly, Chief Anayo Nnebe were from the same Central senatorial zone, the lawmaker who would not want to be named now, said' that was then'.

He contended that Governor Obiano got mass support during his electioneering based on equity that the North senatorial zone should produce the next governor this time since they had not since the creation of the state in 1991.

He said 'he who goes to equity must go with clean hands. The south senatorial district should hold a major position in this state in this dispensation. That is what equity is all about.'

It was gathered that because of this development, the Anambra state House of Assembly has not been able to sit for upward of a month now apparently to avoid a crisis session.

But when contacted on phone, the press secretary to the speaker, Mr. Fidelis Nwakwesili, denied any plot to remove the speaker.

He said the House has not been able to sit because the generator that supplies electricity to the House broke down, adding that they would resume sitting as soon as possible; but information at our disposal says stakeholders in the state have waded into the matter with a view to ensuring that the proper thing is done.