NO MONEY TO RUN BUSINESSES 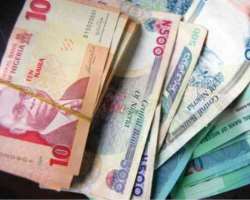 No money to run businesses
BY OLUWASEYI BANGUDU
March 16, 2010 01:52AM
Despite pumping N620 billion into the banking sector, businessmen still do not have access to credit to finance their projects. Bismarck Rewane, the Managing Director, Financial Derivatives Company, said the paradox of the industry remains that credit intermediation is declining sharply in the face of money supply saturation.

“The credit crunch is unlikely to ease anytime soon. The decisions of the last committee meeting did not address the credit crisis,” he said. He, however, commended the committee for acknowledging that there is a credit crisis rather than toeing the path of national self-deception.

The Central Bank of Nigeria, confirming that the credit crunch is worsening, said, a decline in annualised credit to the private sector by -16.20 per cent, signals a stalling of economic recovery.

Risk aversion
An extreme level of risk aversion hinders banks from giving out credit facilities, even though they have enough to lend out. A bank official at First Bank said banks would rather take their funds to the Central Bank on the two per cent interest rate overnight, than lend them out, owing to a lack of confidence in the safety of their funds. “Banks are not lending, neither are they creating assets for now. They would rather keep the money with the Central Bank and collect it the next day,” he said.

But the last Monetary Policy Meeting reduced the rate to one per cent, to discourage banks from keeping cash idle, and encourage them do more lending.

Exorcising the ghosts
However, Mr. Rewane in the March edition of his monthly Economic Review said the ghost of banks' risk repugnance will not “be exorcised with this measure”, adding that liquidity would be freed up when nonperforming assets are bought over the Asset Management Corporation, when it becomes effective.

While keeping the standing lending rate flat at eight per cent, the CBN reduced the standing deposit facility to one per cent, down from two per cent. This is the second time the industry regulator is reducing the rate, which was previously at four per cent before it was brought down to two, a step it adjudged to be necessary to encourage banks to unlock the credit market.

Asset Management Corporation, a must
Finance experts say the passage of the AMC bill by Nigeria's House of Representatives has already started to drive the markets. A report by Kato Mukuru, Esili Eigbe and Odalo Addeh, a team of finance experts at Renaissance Capital, published on Friday revealed that, “The passage of the Asset Management Corporation (AMC) bill has been the key driver of Nigerian equities this week (March 8-12), putting paid to speculations about its passage on a lack of support by the current administration. Over this week, equities have rallied 5.3 per cent, bringing the return on the index to its high of 15.9 per cent. In addition, the average value of stocks traded has advanced 19 per cent to $22.6 million daily, from $19 million last week.”

They also expect increased trading activities next week in the shares of some of the strong banks, as the industry complies with the common year-end reports as directed by the CBN, which should have been published before the end of March.

“If the results are better than the market expects, we think this week's rally could be sustained, potentially supported by further positive news on the passage of the AMC bill. We note that the Senate has now referred the AMC bill for a public hearing (its third reading), before being presented again for a final reading,” the report said.

The sharp deterioration in banks' assets on account of non-performing loan portfolios, estimated to have increased to around 22 per cent at December 2009, up from eight per cent a year earlier, has made banks lending-shy.

Finance experts believe that a turnaround in credit metrics is unlikely to be achieved simply on the back of interest rate decisions, especially given the weakness of the monetary policy transmission mechanism.

They argue that any turnaround will require more structural steps, such as the establishment of an asset management company to clean the system and speed up the recapitalisation of the finance industry and the emergence of a corporate bond market..