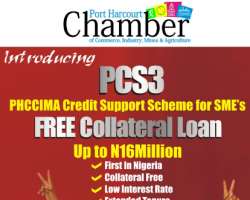 According to a statement signed by the Publicity Secretary of PHCCIMA, Chief Nabil Saleh, the Special Guest of honour and Deputy Governor of Rivers state, His Excellency, Engr. Tele Ikuru shall formally carry out the launch at the PHCCIMA council hall.

Speaking to PHCCIMA media, Unachukwu president of the chamber, said the launching of the 'PHCCIMA CREDIT SUPPORT SCHEME for SME's is not only historical being first of its kind in Nigeria, but is setting a new precedence for development of SME's in the entire country. He said the scheme is collateral free; low interest rate has an extended tenure life span and attracts invaluable business support from the chamber.

The scheme is powered by Grofin Finance and Midland Microfinance Bank Limited, and to access the loan, interested individuals, SME's, including corporate bodies must be a financial member of Port Harcourt Chamber of Commerce, must possess PHCCIMA credit qualification and must provide analysis of business proposal for scrutiny.

The President is urging members to take advantage of this very rare opportunity to better the lot of their businesses.