“I will Establish Industrial Renaissance In Akwa Ibom”- Amb Assam 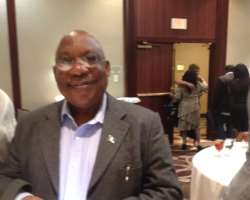 Houston Texas: The Nigerian Ambassador to the Federal Republic of Russia and Belarus, His Excellency, Ambassador Assam Ekanem Assam (SAN) has lauded the Akwa Ibom State governor, Chief Godswill Akpabio for changing the infrastructural landscaping of the State and making the state accessible to industrial revolution. Ambassador Assam made the commendation early this week in a Town Hall Meeting with business community, intelligentsia and socio-cultural groups in Houston, Texas, the United States of America.

He maintained nobody was capable of faulting the governor when it comes to his infrastructural transformation agenda. He argued that when Akpabio talked about making changes with anger, it did not translate to mean he was an angry man; rather he came and saw the road decay, got angry over it and in the same vein, transformed it.

Ambassador Assam said when elected into office, he will transform the state to an industrial renaissance in a few years in office. He said there was no denying the fact that people of the state have complained bitterly about hunger and poverty as one of the indices critically bedeviling the state, a case which he said his administration will pay serious attention to, especially in areas of agriculture, technology, industry and trade.

“There's no doubt that this administration has adorned the state with infrastructural facilities; and you will agree with me that this is the dot that connects industrialization. Akpabio must be applauded for this; and even his critics will be silent on this salient fact. I will no longer donate too much time on this direction but to ensure that our people get opportunity for massive employment. You cannot go to school and study when you're hungry; you cannot even take medication with empty stomach. That's why I'll make Akwa Ibom an Industrial hub for massive employment to set in. It is a goal I want all of you all both at home and in Diaspora to support me with.” Assam said.

On whether he was intimidated that Governor Akpabio was fronting a particular candidate for the governorship position, he said he was not aware of anybody being anointed by Akpabio to succeed him, and the governor being a true democrat, he will not venture to impose a candidate on the people, as the people will resist such imposition. He maintained that any qualified candidate of the state will not hide behind the governor or the president to seek an elective office; only the misfit could do that.

“My people, I don't think governor Akpabio has anointed anybody to succeed him. Let's assume that this is coming from the rumor mill. The governor, whom I know, is a true democrat; and true democrats do not impose leaders on the people. The people are allowed by democrats to elect their leaders. If anybody intends to impose a leader on the people, the people will rise against such imposition. You're the people, will you allow anybody to impose any leader on you? Assam asked rhetorically?

On whether the zoning system affects him adversely or favorably, Chief Assam maintained he was not contesting the governorship position based on the zoning arrangement. He stated that the rotation and zoning principle was entirely the People Democratic Party's (PDP) affair. He explained that since zoning principle was enshrined in the PDP constitution, it was the party decision to make arrangement based on its constitution; and if it decided on the zoning, it would be more favorable to him given that he's from Eket Senatorial District (ESD) which governor Akpabio and majority of the people of the state have zoned the position to; but if it were going to be a free for all contests, he sees himself as the most qualified candidate given his vast administrative, political, social and professional experience.

“I have served in various positions of the government. I graduated as lawyer since 1979 and was called to Bar in 1980. I have played active politics since then, and have represented my people both in the local, State and federal levels most diligently; this you all know. I have represented a lot of you sitting here, my brothers and sisters, in various cases in court and won. I have been an Attorney General of the state; today I am representing the Federal government of Nigeria as an Ambassador of Russia and Belarus. I don't need to sing my praises; I just want to remind my people of the quality person that you will have to support as a governor of your state. It is my credentials that intimidate other aspirants. That is why some of them want to hide behind somebody to contest election.”

Assam called on the Diaspora to participate actively in the politics at home to change the thinking and orientation of the people and fight the culture of ethnic politics which is currently raging like wild fire in the state.