Emeka Ike finally reply to rumour of Break Up With Wife 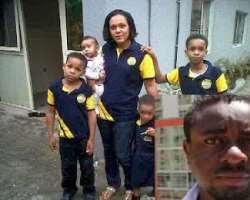 Recently, news went viral that Nollywood actor Emeka Ikeand his wife, have been having troubled situation which has led to his wife had dumping him over allegations of battery.

The gist also had it that after the split, Emeka took two of his children to Abuja with him while his wife remained in Lagos with the other two.

But Emeka has laughed it off, saying it's all a lie.

Emeka replied his pundits by posting the photo of his family on his Facebook wall and wrote "my wife and kids".

RMD Vs Linda Ikeji; The Lion And The Tortoise?