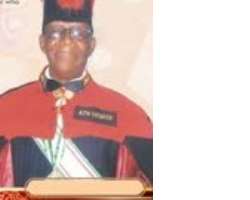 Destiny Ugorji
Sir Cletus Odinaka Ibekaku, father of the immediate past Director of the Nigeria Financial Intelligence Unit-NFIU, Barrister Juliet Ibekaku is dead. He died on the 9th of March, 2014 at the Niger Foundation Hospital, Enugu, Enugu State, Nigeria at the age of ninety (90).

Until his death, Nnanyelugo, as he was fondly called was a senior member of the Knights of St. Mulumba (KSM) of the Roman Catholic Church for more than thirty-four years, a philanthropist, as well as a retired banker.

He spent thirty years in the then African Continental Bank (ACB) where he rose through the ranks to become a manager. He assisted the ACB in establishing several branches across the country from Abakiliki in Ebonyi state to Agbor in Delta State and from Aba to Ile-Ife in Osun State, as he traversed the whole country in search of lucrative locations for the ACB.

Sir Ibekaku was well known for his contributions towards the education of many Egede indigenes. For him, education was considered the most important tool for the development of his community. As such, he spared nothing to ensure that his children and indeed the members of his extended family had the opportunity to go to school and to aspire to wherever their ambitions would take them. He led an austere Christian life.

According to a funeral arrangement released by his family, late sir Ibekaku will commence his last journey on the 10th of April, 2013 with a wake keep at his family home in Ameke, Egede Udi LGA of Enugu state. The Requiem Church Service will take place by 10am on Friday, 11th April, 2014 at St. Cyril Catholic Church, Egede, followed by his interment.