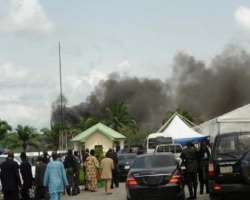 Warri March 15, (THEWILL) Delta state governor, Dr. Emmanuel Uduaghan, Mr. Ikedi Ohakim of Imo state, Adams Oshiomhole of Edo state and other prominent personalities today in Warri, Delta state escaped death as no fewer than eight persons were burnt alive in a Mercedes Benz car while six were said to be seriously injured when two bombs suspected to have been planted by militants of the Movement for the Emancipation of the Niger Delta, MEND exploded near the government house annex venue of the Vanguard newspapers post-amnesty dialogue.

The Minister for Niger Delta, Ufot Ekaete, Gen. Azazi, Patrick Utomi, PFN President, Ayo Oritsejafor, Olu of Warri and other traditional rulers were also among those that narrowly escaped death when the bombs exploded.

The first bomb exploded when the governors and other top dignitaries' convoy were arriving the venue of the programme which had over a thousand dignitaries seated.

Though the impact of the explosive shook the whole venue, the arrival of the dignitaries who were looking worried however calmed the situation and the curiosity of the people.

The Chairman of the occasion, Gen. Andrew O Azazi took his address immediately after the national anthem, but barely two minutes after the host, Mr. Sam Amuka took his turn another bomb went off this time few meters away from the government house, the impact this time around shook the whole hall shattering all the glasses and even that of the governor's main office.

Confusion came after the second explosion as all the dignitaries, governors, other invited guests and even security operatives ran out of the venue.

Investigation however revealed that the explosives were planted in two cars and parked along the NPA expressway, the route leading to the government house.

The first explosive went off almost targeted at the convoy of the arriving dignitaries, two cars that were passing shielded the convoy and took the hit killing the occupants and injuring a commercial motorcycle rider and his passenger.

The second explosion, which went off, also affected another car, injuring four persons who incidentally were close to the spot of the incident.

Though men of the Joint Task Force (JTF) were visibly absent at the venue of the event, however the men of the anti- terrorist squad who were present in every corner took to their heels on hearing the explosion but later come back to give protection to the dignitaries who were scampering for safety.

In a press statement signed by the state information commissioner Mr. Oma Djebah, Governor Emmanuel Uduaghan said he has ordered the evacuation of all participants at the conference to a safe place while the event has been postponed.

He however said the state will not be deterred by this action and will continue to deliver the dividend of democracy to the people.

According to him, "The people of the Niger Delta will not be intimidated nor be deterred by the cowardly act of a few oppose to a peaceful and non violent approach of resolving the historic grievances of the region."

Meanwhile, MEND in an online warning statement to THEWILL earlier claimed responsibility saying, "The Movement for the Emancipation of the Niger Delta (MEND), has successfully breached the security and planted three explosive devices believed to Ides in and around the Government House.

"After receiving the baton of ignorance from his Bayelsa State counterpart, the governor of Delta State declared in the Vanguard newspaper of February 22, 2010 that Tthe Movement for the Emancipation of the Niger Delta (MEND) is a media creation.

"This assertion coming from the same person who claimed publicly that an oil pipeline can be destroyed by one man armed with a bottle of petrol, is hardly surprising. What is surprising is how he managed to obtain a science degree.

"Thinking of no better way to announce our continued presence in the Niger Delta to Mr Uduaghan, operatives of MEND today March 15, 2010, successfully breached the security at the Delta state government house in Warri and planted three explosive devices in and around this compound which is the venue of the Vanguard Post Amnesty Dialogue organized by the Vanguard newspaper.

"These devices will be detonated remotely.
"In our usual effort to prevent the loss of innocent life, the Movement for the Emancipation of the Niger Delta advises the immediate evacuation of the Government House annex Warri and its immediate surroundings up to the Delta state Brodcasting Corporation.

"The time given for this evacuation before the detonation of the first bomb is thirty (30) minutes which will elapse by 1130 hrs Nigerian time. The primary school bordering the government house annex should be evacuated immediately!

"The first bomb will be detonated at exactly 1130 hrs. We will thereafter advise on the other devices planted within and around the venue of the vanguard newspaper organized and Delta state sponsored conference. Organizers and participants at this jamboree will ignore this warning at their peril!!!

"The deceit of endless dialogue and conferences will no longer be tolerated. The lands of the people of the Niger Delta were stolen by the oil companies and Northern Nigeria with the stroke of a pen.

"The vanguard organized and Delta State sponsored conference is one of such tools of deception. The Niger Delta has been partitioned into oil blocks, which have been distributed amongst mostly Northerners while indigenes of the Niger Delta can barely survive. One such example being General T.Y. Danjuma.

"It is common knowledge that no southerner can lay claim to an inch of land in the North so why should we continue to talk as the occupation of our land and theft of our resources by the oil companies and Northern Nigeria persists?

"The governors of the Niger Delta are shameless and visionless stooges who are more concerned with looting their state treasuries and seeking a second term in office, even against the wishes of their people.

"MEND will attack any such gatherings designed to propagate more falsehood. Members of the public are hereby warned to avoid such gatherings as they may not be fortunate to have a warning before detonation.

"In the coming days, we will carry out a number of attacks against installations and oil companies across the Niger Delta and will spread out to companies such as Total which have been spared in the past. We hope the actions, which will follow, will persuade Mr Uduaghan that we exist outside of cyberspace, MEND said.

The governors not too long after the bomb explosions were later seen at the Osubi airport in what a state government representative explained was to see off Governor Ohakim and his entourage.