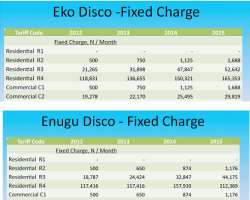 For the avoidance of doubt, PowerUp Nigeria demands are clear and ubiquitous:

1. The illegal, uneven and oppressive N750 Fixed Charge should be REMOVED immediately.

2. A proper audit of every house should be carried out, and the concept of 'Estimated Billing' should be done according to the regulations, and explanations made to consumers.

3. The Electricity Distribution Companies Should starts the installations of meters immediately.

However, despite our patriotic call, NERC has release a statement via its Facebook page titled Power Sector Reform; Next Steps By Sam Amadi. Our take on this latest essay is summarised in this phrase: Commission of Lies.

PowerUpNG has come under all sorts of attacks since the release of the first statement which climaxed with the recent engagement of NERC with stakeholders and Civil Society Organisations on a Social Media platform.

When asked direct questions about electricity issues, NERC only answered by referring PowerUp Nigeria to its website.

One of NERC's claims is that, there are Consumer Forum Offices in all the Geo-Political zones. While this information may not be in doubt, it became an issue when the NERC could not provide us physical addresses and contact phone numbers of these offices. Worse still, the forum link on the commission's website is a dead link.

Secondly, When asked about what NERC is doing to carry average Nigerians along in fulfilling their duty of fair umpiring of the Power Sector, NERC said it holds periodic Power Consumer Assembly at their Forum Offices/Zonal Office. Also when queried about the effectiveness of such 'consumer assemblies', NERC offered no response.

In fact, investigations by PowerUpNG reveal that no one has attended any of these 'consumer assemblies' anywhere? Is this a fair tactic to reach thousands of Nigerians out there paying for unavailable electricity?

When PowerUpNG asked what purpose the 'Fixed Charge' serves, NERC chose to remain silent, and instead of clarifying issue, chose to embellish the fraud on Nigerians by denying the truth (See Tweets Below):

Another point of note is the fact that ALL present staff of the distribution companies are on a six month contract since November 1st, and on reduced salary, compared to their days with Power Holding Company of Nigeria (PHCN). A commissioner of NERC, who craved anonymity, claimed this was a favor done to the staff by the NERC by negotiating on their behalf.

As earlier stated in the first press release, NERC, under the stewardship of Dr Sam Amadi has been working as spokesman for the Electricity Distribution Companies, while the consumers NERC ought to represent keep fending for themselves.

One of such instances of consumers fending for themselves involves some residence in Surulere. They held a town hall meeting where it was decided that all the bills from Ikeja Distribution Company would be returned to their office and fair billing would be asked for.

To reiterate our position on this issue, we emphasize again, that we support 100% the Power Sector Reforms, as we believe that this is one major way to get the necessary investments into the sector.

However, what we do not agree with is the lack of consideration for millions of consumers who are groaning under the weight of devilish estimated billing and present perpetual darkness we experience.

1. The illegal, uneven and oppressive N750 Fixed Charge should be REMOVED immediately.

2. A proper audit of every house should be carried out, and the concept of “Estimated Billing” should be done according to the regulations, and explanations made to consumers.

3. The Electricity Distribution Companies Should starts the installations of meters immediately.

Failure to implement these demands will have consequences for NERC and its leadership.

We have been digging, and we have more information, and in due course, we shall release more, if we have to.