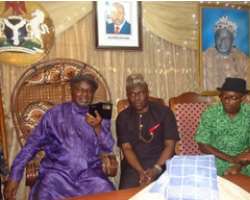 In line with the vision of Governor Godswill Akpabio for every community in Akwa Ibom state to be connected to the electricity grid, the Senior Special Assistant to the Governor on Power, Dr. Victor Udo recently intervened to resolve a power related conflict that lingered between the people of Ikono and Ibiono Ibom LGA.

The Chairman, Ikono LGA, Mr. Emmanuel Ukpong reported to the office of the SSA on power that Ikono had been without power supply for more than 3 years because the people in Ibiaku Itu Udo community in Ibiono Ibom LGA refused connection of Ikono to the existing electricity grid from Itu substation via Ibiono Ibom LGA.

In an effort to resolve the issue, the SSA on Power accompanied by Chairman of Ikono LGA visited the Paramount Ruler of Ibiono Ibom LGA, HRM (Dr.) Ime Udousoro Inyang in his Palace.

The Chairman, Ikono LGA, Mr. Emmanuel Ukpong stated his side of the story in the Palace of the Paramount Ruler.

The Chairman said "all efforts and pleas to resolve the issue with the people of Ibiaku Itu Udo community met with brick walls" which caused him to take his plight to the SSA on Power for intervention and ultimately to the Paramount ruler, Ibiono Ibom.

Meanwhile, representatives of Ibiaku Itu Udo community present at the meeting also stated their side of the story.

The community Spokesperson, Chief Emena Itu Udo, said "our resistance was due to the doubts we had as to the implication of the connection because we were misinformed by a PHEDC staff who said the community's electricity bills will increase and the community will experience low voltage if Ikono is connected to the grid"

In response the SSA on Power, Dr. Victor Udo explained that "the vision of His Excellency is that every community in Akwa Ibom should be connected to the grid, so to have a whole local government without power supply atall is unacceptable"

The Paramount Ruler, HRM (Dr.) Ime Udousoro Inyang in his response said "although it is a matter between two governments; Ikono LGA and Ibiono Ibom LGA but with the SSA on Power as a moderator I cannot undermine the expertise and judgment of the SSA on Power so the community should rely on the SSA's judgment"

While expressing his appreciation, the Chairman of Ikono LGA said "the connection of Ikono to the electricity grid will be of immense benefit to the people of Ikono LGA because it will increase the internally generated revenue (IGR) and help small businesses to grow".