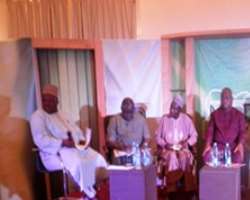 On the 13th March 2014, the Centre for Democracy and Development (CDD), with support from the International Republican Institute (IRI), convened the second edition of the Nigeria Political Party Discussion Series (NPPDS) at Protea Hotel, Apo, Abuja. The meeting, which was attended by over 40 participants, including members of the political parties, civil society groups, media and government, was convened to facilitate a discussion amongst political parties on party funding in the country as a way of fostering democratic strengthening and good governance.

To showcase citizens' perception on party funding in Nigeria since 1999, a vox pop was screened at the beginning of the event. Many of the people interviewed were of the opinion that there is an unavoidable connection between money, politics and electoral victory. They, however, concluded that parties are not supposed to use money to entice their supporters because where money is used wrongly; it reduces the value of democracy to its citizens. Diverse opinion was also expressed with respect to government funding of political parties in the country.

The discussions at the event resonated around choice between the politics of money and the politics of ideas, political parties as corrupt institution, moneybags and godfatherism and how to address the perennial problem, public funding of political parties, the actualisation of an electoral offences commission, practicability of Section 91 of the Electoral Act that provides for spending limit for political parties during campaign, and how campaign financing can be monitored and controlled in Nigeria. While party representatives generally believed that ideas should be a focal point of all political parties they however, emphasized the fundamental role money plays, as party ideologies are often driven by money.

The following were the thumb-nail sketch of some of the resolutions reached by the panelists and other participants at the event:

a) Political parties should stop the use of money to lure people into voting them into power and voting should be on the basis of party ideology and a manifesto.

b) The zero-sum game politics in must be stopped thereby politics must be on the basis of service to the people.

f) There is a need to strengthen the regulatory framework to sanction violators of rules guiding campaign spending.

g) Political parties that spend above the stipulated limit by the Electoral Act 2010 should be sanctioned.

i) The right to set up regional or local parties should be constitutionally granted.

j) The account book of political parties should be made open to the general public to access at all time.