…As He Speaks On Bonny Polytechnic, Abandoned Federal Road Projects, Defection Others
By Anderson Hart 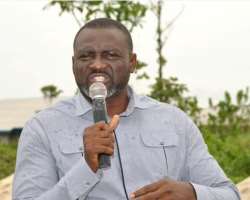 Rivers state Commissioner for Transport and Political leader of All Progressive Congress in Bonny Local Government Area, Hon George Tolofari has urged the people of Bonny to continually embrace the spirit of peace, love and harmony.

Tolofari made this call while speaking to newsmen in his office, he said with the spate of needless strife witnessed across some of the local governments in the state, it is imperative to make the call to re-awaken the spirit of brotherliness, tolerance and to implore the people to continue maintain the inherent tradition of peaceful co-existence which the people has continued to uphold even in face of opposition, political rivalry and party affiliation.

BONNY POLYTECHNIC
Speaking on the recent federal government approval to kick start the Bonny Polytechnic by September, he said it shouldn't attract too much excitement because Bonny people deserve much more than the Polytechnic. Hear him: “ I need not re-emphasize that Bonny island has made significant economic contribution and has been a livewire to the economic existence of this country; I think the President should see an opportunity to help Bonny people beyond the approval of a polytechnic . Don't get me wrong, I am not saying the Polytechnic is not a welcome development, because I know it will give some of our people the opportunity to go to school and get educated, however I believe we deserve much more if you consider our economic pedigree and contribution to national wealth. The Bonny people have been deprived by the same people we carry their burden in terms of oil and gas, pollution, environmental hazard etc.".

Tolofari called for a political will that will see the completion of the lingering Bonny/Bomu road that has foot dragged for so long. He also lamented over the stalled Bonny ring road project and most importantly expressed disappoint over the federal Government's decision to stop the Bonny NLNG train seven project which was halted to kickstart the Brass NLNG project.

On the Bomu/Bonny road, the Rivers Transport commissioner noted that the federal government is not sincere on the completion of the Bonny/Bomu road project.

BOMU/BONNY ROAD
Hear him: “When you have a project of N15 billion and you earmark a paltry N100 million annual budget for it; it only means one thing that the federal government is not sincere about the

prosecution of such project”. He maintained that the road is very significant if completed because it would have brought in a lot of development and progress into the place.

Further speaking on the NLNG train seven project, he said Bonny people are not happy that the train seven project was stalled, he said the project ordinarily would have created massive employment opportunities for Bonny indigenes and other Nigerians alike to cushion the effect of harsh economic situation on the Island, describing the stoppage as a great injustice to the people of Bonny by the Jonathan led administration.

BONNY RING ROAD
Lamenting on the Bonny ring road, he said the road awarded by NDDC has been a subject of concern. “The road was intended to link the various villages and make movement within the adjoining villages easy, it was also intended to reduce pressure and concentration of people on main Bonny town – however, we cannot explain why it is presently stalled", he stressed, calling on the Niger delta development Commission and the Ministry of Niger Delta to proactively expedite action for the completion of the road.

“The few things mentioned above are just a tip to establish that the approval of the Bonny polytechnic does not call for over celebration, there are more pressing, paramount or better still significant needs of the people we believe Mr. President should have addressed aside the polytechnic because Bonny people deserve much more than they are getting and the President of all people should understand this” he averred..

ADONYE WILCOX'S DEFECTION TO APC
Tolofari who is the political chieftain of APC in Bonny also spoke on the recent defection of former Vice chairman of Bonny Local government, Hon. Adonye Wilcox from PDP to APC, He said it is a welcome development considering his pedigree. “Adonye's declaration to APC is a plus for the party in Bonny. He is a man that cannot just be waved aside when talking about grassroot politics on the island. It will be recalled he gave us a run for our money when he contested for chairmanship under the defunct National Unity Party, NUP while we were then in PDP, so we are excited at his decision to join our rank” he said.

The commissioner said down played rumours of fears, mixed feelings in the air over the defection saying it is normal, however he assured everyone in APC Bonny that the grassroot politician is not coming to distort the arrangement on ground in the party but rather his entry has added more value to APC. “Adonye Wilcox is an intelligent politician, having witnessed the new wave of change in APC he had decided to be part of the new paradigm and we are truly happy because where we use to put in 80% effort during election, we can be rest assured that Adonye will add more impetus to reduce our workload. He use the opportunity to urge politicians to make concerted effort in strengthening unity, maintaining stability, and promoting social harmony at all times in the local government.