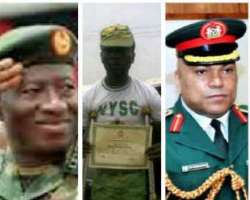 No doubt, Henry Balow must be having in mind a living legend like Babaeko Oluwaloseyi, an ex-corper posted to serve in Sokoto State,to serve, when he wrote the poem 'BUILDING THE NATION'.

Read this piece:
'Building the Nation' by Henry Barlow (Uganda)
"Today I did my share
In building the nation.
I drove a Permanent Secretary
To an important, urgent function
In fact, to a luncheon at the Vic.
The menu reflected its importance
Cold bell beer with small talk,
Then fried chicken with niceties
Wine to fill the hollowness of the laughs
Ice-cream to cover the stereotype jokes
Coffee to keep the PS awake on the return journey.
I drove the Permanent Secretary back.
He yawned many times in back of the car
Then to keep awake, he suddenly asked,
Did you have any lunch friend?
I replied looking straight ahead
And secretly smiling at his belated concern
That I had not, but was slimming!
Upon which he said with a seriousness
That amused more than annoyed me,
Mwananchi, I too had none!
I attended to matters of state.
Highly delicate diplomatic duties you know,
And friend, it goes against my grain,
Causes me stomach ulcers and wind.
Ah, he continued, yawning again,
The pains we suffer in building the nation! So the PS had ulcers too!

My ulcers I think are equally painful
Only they are caused by hunger,
Not sumptuous lunches!
So two nation builders
Arrived home this evening
With terrible stomach pains
The result of building the nation -
- Different ways."

What makes my own case more worrisome and pathetic, is that I am educated, with a very good grade of a second class upper from a reputable University like OAU Ife, knowing fully well that driving is an unskilled labour, which does not really needs or requires a western education. To be a driver you don't need to be educated as I have seen so many illiterate drivers. Be it as it may, responsibility is responsibility when it comes to organizational roles; it will be exactly two years by July 2nd this year that I was posted to Sokoto State by the ousted and uncaring NYSC DG, Brigadier General Okorie Affia, who can be likened to the PS when the Sokoto State Transport bus I was traveling with to the NYSC camp ground was robbed by some Fulani Herdsmen in Kebbi State. The attack led to a ghastly motor accident, which subsequently caused me to have multiple fracture on my right leg, and a hip dislocation which required me to undergo a hip transplant at a self-coughed-out whooping sum of nine million naira. Alas! Here I am, left alone with my pains, despite my obedience to the national call to serve my fatherland under the sun and rain, in a far away land and volatile region like Sokoto State. It's so pathetic that this government agency established by the General Gowon's administration to unite Nigerians after the civil war has been turned to a conduit pipe for personal enrichment and pecuniary gains by characters and charlatans like the unceremoniously sacked NYSC DG, who never deemed it fit or necessary to visit me, nor delegate any of the NYSC staff to visit me throughout the over 8 months period I spent in the hospital to treat myself.

It took the intervention of President Goodluck Jonathan before NYSC could refund my medical expenses, a year after I left hospital. Despite the billions of naira budgetary allocations to the scheme, all effort in appealing to the FG and NYSC to get me further treatment has fallen on deaf ears, even when I still need urgent medical attention. My multiple letters sent to President Goodluck Jonathan for monetary compensation, automatic employment and scholarship are yet to get favourable responses.

Presuming I were a son of a governor, senator, or top echelon of the country's system, I'm pretty sure I wouldn't have been posted to a flashpoints region like Sokoto. In fact, the government would have charged the new NYSC boss to act swiftly. I believe my conviction dovetails the final agreement and disposition of the general public.

Between me, Oluwalosheyi Babaeko - a graduate that had lost his father for the past 23years and who still obeyed to serve in Sokoto State - and Gen. Okorie Affia, the then DG of NYSC, who had an helicopter attached to his office but never bothered about me nor provided the needed medical services that I deserved to get me back on my feet, who among the two of us has done his own part of building this nation called Nigeria?

I therefore use this medium to call on all Mass Media, the Civil Rights Societies, the Senate President, and a host of other concerned Nigerians at home and in the Diaspora, to help me appeal to President Goodluck Jonathan to revisit my letter and act promptly without further delay.I equally use this medium to thank my family members, most especially Mr. Steve Babaeko, MD/CCO of X3M Ideas for his unwavering support, moral advice, spiritual bulwark and financial security.

And as for the garrulous, despotic and tyrannical human right violator called Wammako, the Governor of Sokoto State, who is the brain behind the Sokoto State Transport that operates without an insurance cover for its passengers, and who has failed in responding to my letters and request for compensation for the recklessnes of his employee and harm done by the driver of the Sokoto State Transport, one thing is sure: My God will avenge me without delay and He will visit you and your entire household for your callous act, and wanton neglect.