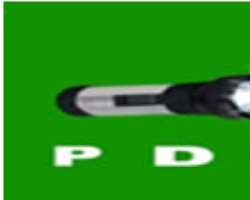 Peoples Democratic Movement, PDM, has approved Monday, March 17th as the commencement date for its manual membership registration. This decision was arrived at during the just concluded meeting of the National Executive Committee of the Party which took place at the party's National Secretariat in Abuja on Monday, 10th March 2014.

The approval of the March 17th date follows extensive preparations and sensitization for the exercise which is to take place between 8. a.m. and 5 p.m. everyday from Monday, 17th March to Sunday 23rd March 2014 simultaneously at each of the 8,812 wards throughout the states of the federation.

It will be recalled that PDM had launched its Online Membership Registration at www.pdm.ng http://www.pdm.ng/ on 15th September, 2013 in Abuja merely a month after the Party was registered by the Independent National Electoral Commission. The online membership registration, which is still ongoing, was received by Nigerians with excitement and high expectations and is the first of its kind in Africa. More than than two million members have already registered online.

The Party called on all Nigerians of voting age to seize this opportunity and register en masse to provide the electorate with variety and more choices, which is what democracy is all about.