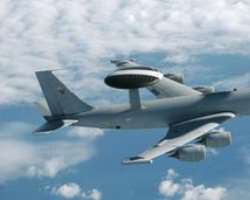 
The North-Atlantic Treaty Organisation (NATO) is to deploy reconnaissance planes in Poland and Romania to monitor the Ukrainian crisis.

It gave the go-ahead for the flights on Monday, a NATO spokesman said.

It comes as Russia cements its control of Ukraine’s Crimea ahead of Sunday’s referendum to join Russia. Ukraine and the West say this is illegal.

The AWACS have some capacity to monitor vehicles on the ground but their chief mission will be reassurance. The flights will be mounted from bases in Germany and the United Kingdom.

An Alliance spokesman described the decision as “an appropriate and responsible action in line with NATO’s decision to intensify our ongoing assessment of the implications of this crisis for Alliance security”.

The US has already sought to reassure its allies in Europe by adding six additional F-15 aircraft to the NATO air policing mission over the Baltic Republics and it is also despatching 12 F-16 fighters for a training exercise in Poland.

In the latest move on Monday, armed men – said to be Russian troops and local militias – seized a military hospital in Crimea.

The attackers marched into the hospital in the regional capital Simferopol, threatening staff and some 30 patients.

Pro-Russian troops are also blockading Ukrainian troops across Crimea, which is an autonomous region.

Moscow has officially denied that its troops are taking part in the blockades, describing the armed men with no insignia as Crimea’s “self-defence” forces.

The government in Kiev – as well as the US and EU – accuse Russia of invading Ukraine, in violation of international law.

Last week, the organisation said it was reviewing all co-operation with Russia and stepping up its engagement with the government in Kiev.

NATO’s announcement on Monday came hours after men in military uniforms broke into the Simferopol hospital, where Ukrainian soldiers and veterans were being treated. Some of the patients were reported to be seriously ill.

The hospital director said he was forced onto a bus and kept there for half-an-hour.

Separately, pro-Russian troops tried to capture a military transport base in Bahkchysarai, a town between Simferopol and the city of Sevastopol.

The gunmen fired warning shots into the air, but Ukrainian soldiers repelled the attack.

Step-by-step, and meeting very little resistance, the pro-Russian troops are dismantling Ukraine’s ability to resist in Crimea, says the BBC’s Christian Fraser, who is in the region.

On Sunday, tens of thousands of people in Ukraine held rival pro-unity and pro-Russian rallies.

Moscow supporters beat up their opponents in Sevastopol. Some of the attackers were Russian Cossacks with whips.

However, German Chancellor Angela Merkel told him in a phone call that she considered the vote illegal.

Both EU leaders and the US have warned Moscow they would slap even tougher sanctions if Russian troops remained in Crimea.

Unrest in Ukraine erupted in November after former President Viktor Yanukovych’s last-minute rejection of a landmark EU deal in favour of a bailout from Russia.

Mr Yanukovych was ousted last month, and a new government has been voted in by the Ukrainian parliament which Russia says was a “coup”.