PREZ JONATHAN DELIVER PART OF HIS PROMISE ON NIGER BRIDGE 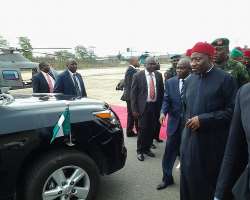 President Goodluck Jonathan has performed the ground breaking ceremony of the Second Niger at the Anambra State project site. The 1590 meter long bridge awarded at the cost of 117.86 Billion Naira would be completed in four years.

President Jonathan said that the bridge was part of the Transformation agenda and a critical national infrastructure that was key to social economic development of the country. He said it would effectively improve road transportation and communication as well as link industrial and commercial regions of the country and eliminate the burden of traffic gridlock suffered on the Anambra and Delta ends of the road.

He assured that the bridge was designed with necessary components of internationally accepted standards and would deepen national integration and interaction.

The president commended the commitment and unrelenting efforts of Gov. Peter Obi towards the actualization of the project and expressed hope that the incoming administration of Chief Willie Obiano would sustain the interest and enabling environment to ensure the project is completed on schedule.

In his speech, Gov. Obi thanked the president for increasing federal presence in the South-East through various interventions, including the upgrade of the Akanu-Ibiam Airport to international Airport. He reminded the people of the South-East that it was because of the President that the late Dim Chukwumenka Odumegwu-Ojukwu was giving a befitting burial, lamenting that even Zik could not be buried properly as his mausoleum was left uncompleted for many years until President Jonathan started working on it now.

The Minister of Works, Arc Mike Onolemenen said the new bridge and connecting roads would enhance the capacity of the South-East and the South-west transport corridor. He explained that the bridge had two by-passes linking from Anambra and Delta end with an interchange on Onitsha-Owerri road forming part of the project. He assured that the contractor would immediately commence the construction of early works, including preliminary site clearance, earthworks, and road work and piling work, among others.

Speaking on behalf of the South-East, the Chairman of the South-East Governors' Forum, Chief Theodore Orji said that the people of the Zone would remain grateful to Jonathan for doing for them what other past Governments could not do.

In their separate speeches, the Deputy Senate President, Senator Ike Ekwermaddu and the Deputy Speaker, Federal House of Representatives, Chief Emeka Ihedioha, while commending the President for making history by flagging off the bridge project, which they noted would benefit the entire country when completed.

The Flag-off was witnessed by Governors of Anambra State, Delta, Ebonyi and Abia States.