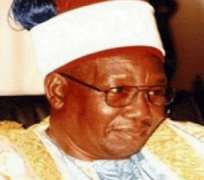 
The Shehu of Borno, Alhaji Abubakar Ibn-Garbai, has directed residents of the state to embark on a three-day fasting 'for divine intervention over the Boko Haram insurgency in the state.'

The directive is contained in a statement issued on Monday in Maiduguri.

The statement quoted the monarch as asking residents to start the fasting on Tuesday.

He said 'I am appealing to all residents of the state to observe a three-day fasting to seek Allah's mercy toward ending the crisis facing us.

'I believe we should continue to seek for Allah's help toward restoring peace in the state.'

Ibn-Garbai added that the renewed violence by suspected members of the Boko Haram sect had led to massive destruction of lives and property.

The Shehu noted that it was time to seek God's intervention to the problem and urged residents to start the fasting on Tuesday and end it on Thursday.

He also directed that special prayers be held in Mosques and Churches to seek God's help and urged residents to remain prayerful even after the fasting.