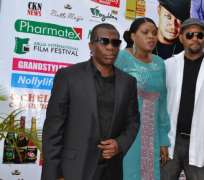 At the recently concluded movie premiere 'Dreams Fall Apart,' at the Social Place, Victoria Island, Lagos, the crème de la crème of the Nollywood industry converged in order to celebrate an iconic movie producer Chico Ejiro and his great work.

The movie produced by Chico, had a star event with the likes of Nollywood diva Uche Jombo Rodriguez, popular U.S base actor Emmanuel Mensah, Maureen Okpoko and Nonso Odogwu, among others.

In a brief chat with Nigeriafims.com, Chico Ejiro, said that, 'the inspiration behind the movie is about child abuse, which he feels that it will motivate people that no matter what they go through in life, they will always come out victorious if they believe.' “I Wasn't In Govt. For Enjoyment, But Service” – Oby Ezekwesili