I want to marry, I need company -Ibinabo 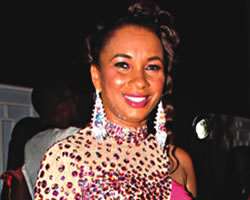 
President, Actors Guild of Nigeria, Ibinabo Fiberesima, talks about her career and how she has coped after her time in the prisons

When you look back at everything that has happened to you, are you fulfilled?

I am not fulfilled.  I thank God for where I have reached so far in this short time.  But if I can get all I asked from President Goodluck Jonathan when the Actors Guild of Nigeria visited him, I would be more fulfilled.

How did you secure audience with the President given his tight schedule?

I wrote more than 20 letters to the presidency on behalf of the guild.  I got a reply one year after. I didn't do anything special. It was just letters that I kept sending. I was just lucky that one eventually came through and I thank God.

As much as you said the visit to the Presidency was to solicit support for the guild, but we hear that huge money also exchanged hands. We learnt you were given N2m while the other actors that went with you were given N500, 000 each…

So, where is the story from?
Those complaining are the selfish ones that usually go there to collect money and share. In their minds, that was what we went there to do. You can ask anybody you know that went for the visit. We were not given any money.

What makes you think you will even get what you asked for from the Presidency?

I am confident. There are transformations going on in most sectors. It is just that before now, the Presidency had not heard the truth about what we needed as a body. People who had gone to represent us had not told him what we needed. I know he will redeem his promise. Nollywood is an export item you wouldn't want to mess with right now. It is not only about oil anymore. Nollywood has surpassed so many things. We are on the level that everybody would have to reckon with us. Why can't we be like Hollywood?

Is it not amazing that after these decades, Nollywood has not really moved forward?

It is the truth. It is because we don't have treaties. Most of our leaders have not been able to understand what it is to be leaders. I have gone out of the shores of Nigeria to find out why people can't come to shoot films here and why we can't go there. Treaties ought to be signed so it would be on paper that they are welcome here. Most other African countries have treaties and we don't have, yet we have a bigger film industry. Now, the President knows about it. He didn't know before.

Your tenure hasn't been devoid of controversies. Some people want you out and there are some other factions who claim you are not AGN president…

The factions are irrelevant to me. They come to me and say one thing and they go behind me and say another thing. At a point, I had to tell them to stop coming to me because I wanted peace. We were in court and I thought that was the better place to deal with it. The court threw their case out because they didn't have a case. Every leader has critics attacking him or her. You say something and people would interpret it wrongly. But I know what I am doing.

Your story is that of grace to grass and to grace again. Did you ever think you would get over that terrible period of your life?

No. At that time, I didn't believe so. But when I gave my life to Christ, it didn't matter to me the state I was. I didn't care if it was grace or grass. I was just contented and happy with myself. That was all that mattered to me.

Do you still remember those days you were incarcerated?

My uncle told me that I should stop going down that path. I can't go back there. You get to that point in your life where you just move on. Nothing matters any more. I am just at peace and that is all that matters to me.

Do you still have time to feature in movies these days?

It is time-consuming, I agree. But I still feature in movies. I have a perfect secretary general. My work is fun. I am even going to Borno State soon. I will go with some actors and actresses. We want to go to some of the areas that have been affected by the crisis and see what we can do to help them. We want to show them love in our own little way.  I don't want to talk about it now till we have gone and come back.

Is it true that AGN election will not take place this year because you want to continue as president?

I am a very transparent person. Election will hold. I don't want anybody to say I did this or that eventually. If they don't think I am good for them, they wouldn't have suggested this. I am a very simple person. This is just who I am.

Are you sure you are happy?
I am happy. I am contented. I am a happy-go-lucky woman. I don't have stress and I don't give anybody stress. Whatever has to be will be.

We learnt you ignored Fred Amata, the father of your child, at an event the other day. Are you having squabbles?

I can never ignore Fred. Even if he is with a woman, I will go and kiss him. I will never disrespect him. Even if I am with a man, I must always walk up to him and greet him. Some people wouldn't do that. I have seen people who got separated and divorced and they don't speak to each other in public, I will never do that. Even if we had quarrelled before the event, I would still walk up to him and greet him.

Have you ruled out marriage?
Which marriage? Please I am not marrying Fred.
What of another man?
There is an opening. When I see a man who wants to marry me, I will marry him. I want to marry please. All my children are grown-up now. I need my own company. Even my kids ask me when I am getting married and I keep telling them I will marry when I find the man. I have not ruled out marriage at all.