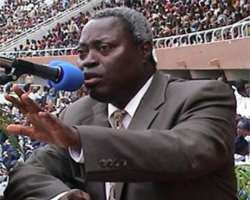 
The General Overseer, Deeper Life Christian Church, Pastor William Kumuyi, on Friday urged all Nigerians to support the security agencies who were tackling the security challenge facing the nation.

Kumuyi spoke at a press briefing held at the Nigeria Union of Journalists (NUJ) Imo Council Secretariat, to announce the crusade of the church, holding between March 7 and March 10 in Owerri.

He maintained that insecurity was not limited to Nigeria alone, but had become a global challenge.

'Nigerians should all join hands to support the government and the security agencies in their efforts to check the spate of insecurity in the country,'' he said.

Kumuyi said that the crusade would attract over 15, 000 people from all walks of life and denominations.

According to him, the power of God will be manifest at the crusade where there will be signs and wonders.

'This programme is organised for the people of the South-East. It will be a supernatural encounter as the gathering is unto God and not unto man,' he said.

Kumuyi said that the church, which started as a small gathering in a University in 1973, had grown to have many branches in Nigeria and across the African continent.

According to him, testimonies abound of people whose lives have been changed and who have been healed by God through the Ministry.

He called on those attending the crusade to have faith in God.

On why crimes were on the increase in Nigeria despite the proliferation of churches, he said that the situation would have been worse if there were not many churches. (NAN)