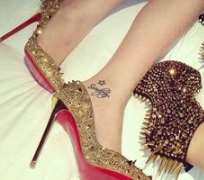 fashionable women never stops looking hot, you tell a woman to show you her shoe collection and you won't see a pair of heels? No way! Its even easier now for Naija chics to follow shoe trends and order via the internet. These days you find Nigerian babes owing expensive shoes worn by celebrities abroad. statistics have shown that women are so obsessed with shoes that even now that most economies in the world are undergoing recession, the sale of shoes rather than decrease have increased. Nigerian ladies are not left out! Trust them to represent all the time.

Gone are the days of old boring shoes like ordinary block heels and ugly mules. Today, high, and indeed very high heeled shoes are what trendy Naija babes are going for, and comfort is no longer as key as the design or designer of the shoes!

A lot of women wear heels, but know little or nothing about its evolution. Many perhaps, are not even interested in the history of shoes,(some are saying as they read this “is that why we are here”?lol.) but for the benefit of the inquisitive ones here's a short history. Looking at a very short History of Highheels, High heels are not a modern invention. Rather, they enjoy a rich and varied history, for both men as well as women. Controversy exists over when high heels were first invented, but the consensus is that heels were worn by both men and women throughout the world for many centuries and for a variety of reasons.

High heeled shoes were worn by the priviledged (highclass) for special occasions, and also butchers to allow them walk above the blood of dead beasts in ancient Egypt and are depicted on their tombs and temples. The earliest recorded instance of men or women wearing an elevated shoe comes from Hellenic(ancient Greek) times. It is suspected that the wear of an elevated sole, or heel, occurred centuries before, but there is little direct evidence to support this. But nevertheless, Ladies do not care, A girl must look hot as they always say! Most of them fall at most times when they take a step! Lol...that's for learners anyway...we C♍ε̲̣̣̣̥ across different shapes of heels...from the one that is shaped like a ship to the one that looks like a biro...which ever is comfortable on you, Rock it...The Red carperts bears it all at events, numbers of heels match in rolls to catch an eye.