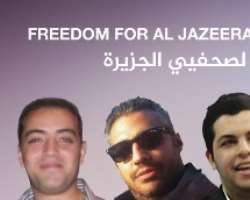 Al Anstey, managing director of Al Jazeera English, said, 'We are again disappointed that Mohamed Fahmy, Peter Greste, and Baher Mohamed were not released from prison today. The charges against our staff are without any substance and totally unjustified; we refute all the allegations labeled against our colleagues. Mohamed, Peter, and Baher are world-class journalists and were simply doing the job of journalism, covering and challenging all sides of the story in Egypt.'

He added: 'To continue to keep them behind bars after such a long time in detention is simply outrageous, so we continue to call for their immediate release. The trial in Egypt is a trial of journalism itself, so we remain resolute in calling for freedom of speech, for the right for people to know, and for the immediate release of all of Al Jazeera's journalists in detention in Egypt.'