A critical look at the kerosene bribery allegation - National Mirror 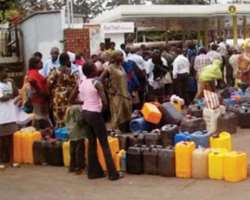 
It has been alleged that officials of the Ministry of Petroleum Resources and the Nigerian National Petroleum Corporation (NNPC) conspired to unleash hardship and pains on Nigerian consumers of kerosene through the extortion of N25 per every litre of the product supplied to complicit oil marketers. One recent report by a national newspaper (not National Mirror) indicated that between 2010 and 2012, roughly N195.5 billion bribe exchanged hands between some oil marketers and officials of the two federal agencies on about 7.819 billion litres of kerosene which must have been lifted by the 'smart' marketers within the period, a development that made it impossible for Nigerians to buy a litre of kerosene for the official price of N50. Characteristically, the allegation has been denied by the management of the NNPC, which, in addition, challenged the accuser to substantiate the claim. But it is unacceptable that the matter should end up with mere hog-wash denial. A high-powered commission of inquiry ought to be constituted to probe the allegation; especially when the NNPC has been accused of public funds' misuse running into several billions of dollars.

Indeed, the Senate said about a fortnight ago that the NNPC illegally spent N700 million on daily basis as subsidy on kerosene, whereas notwithstanding the outrageous purported subsidy spending, Nigerians buy the product at the cost of between N120 and N170 per litre from the open market, instead of N50 per litre, which is the main reason kerosene is being subsidised. This is amazing! The payment of the subsidy had persisted, even long after the late President Umaru Musa Yar'Adua reportedly ordered that it should be stopped, perhaps owing to the fact that subsidy or no subsidy, Nigerians were not getting the product at the official rate, even from NNPC's so-called mega filling stations.

It pleases the nation's downstream oil sector managers to always blame the diversion of the product by marketers, to other locations or for other uses as responsible for the nightmare the cost of kerosene, a major source of energy to the home of ordinary Nigerians, has become. But the recent expose fingered the ministry and NNPC officials as the bane, with their alleged insistence that marketers pay a bribe of N25 per litre before they can lift their kerosene allocations.

Who, between state officials and the marketers is then the liar? It has been equally alleged that many portfolio marketers, who are mostly cronies of government and NNPC officials, enjoyed special privileges above legitimate marketers in terms of access to kerosene allocation and lifting in the past three years. Meanwhile, the ex-depot price of kerosene is said to be N40.90, but the landing cost plus margin, according to the Petroleum Products Pricing and Regulatory Agency (PPPRA) is N156.46 per litre. The pricing template made available on the PPPRA website put the cost and freight of kerosene at N130.47; lightering expenses, N4.09; NPA (Nigerian Ports Authority) charges N0.68; financing N0.64; jetty depot charge N0.80; and storage charge N3.00. These, according to the PPPRA, amount to N140.97; and with another N15.49 distribution margin, the total cost comes to N156.46 per litre. This, PPPRA claims, includes retailers' margin of N4.60; transporters' margin of N2.99; dealers' margin of N1.75, bridging fund of N5.85; marine transport average of N0.15 and administrative charge of N0.15.

Our thinking, however, is that notwithstanding NNPC's denial of the N25 per litre bribery scandal; as well as Independent Petroleum Marketers Association of Nigeria's (IPMAN) and the Depot and Petroleum Products Marketers Association's (DAPPMA) claim of not paying any money beyond the approved N40.90 per liter ex depot price for kerosene, the bribery scam should be diligently investigated and the true reason(s) why a product subsidised to the tune of N700 million daily does not sell at the official price of N50 per litre made public. The National Assembly should go beyond mere sabrerattling in a matter as sensitive as the cost of kerosene that affects virtually every home in the country. It is no longer a secret that the NNPC respects nothing like transparency in its operations. Same goes for the Ministry of Petroleum Resources.

The whistle blower campaign of the Central Bank of Nigeria (CBN) governor, Mallam Sanusi Lamido Sanusi, against corruption in the NNPC, which earned him suspension by President Goodluck Jonathan recently, should not just be discountenanced as the ranting of a disgruntled public officer. For, there can be no smoke without fire underneath.