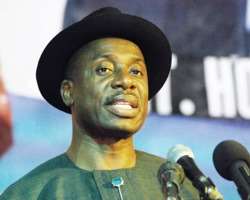 The Rivers State Chapter of the Peoples Democratic Party, PDP, has described the resolution by lawmakers loyal to Governor Rotimi Amaechi on the Nigeria Centenary celebration as illegal and does not represent the position of Rivers people.

PDP in a statement by Jerry Needam, Special Adviser, Media to the State Chairman, Bro Felix Obuah strongly maintained that all sittings, resolutions and decisions of members of the Rivers State House of Assembly loyal to Governor Rotimi Amaechi, outside the Hallow Chambers of the Assembly remain illegal, unconstitutional, criminal and obviously in default to an existing Supreme Court judgment.

The Party described comments on Nigeria at 100 years by lawmakers loyal to Governor Amaechi as hollow, null and void and of no effect.

The PDP boasted that no such sitting and resolutions outside the Hallow Chambers of the Rivers State House of Assembly would stand in the long run.

While urging Rivers people and Nigerians to discountenance such announcements, resolutions, sittings and directives from self-seeking lawmakers who desperately want to share among themselves Rivers resources, the PDP reaffirms its commitment to end the era of impunity, rascality and lawlessness in Rivers State.

The Party described as one capable of provoking public umbrage that a few lawmakers loyal to Governor Amaechi will continue to deceive the people with phantom sittings that have no legal backing nor impact the lives of the People in any positive light.

The Party commended the other lawmakers led by the Speaker, Rt. Hon. Evans Bipi, who have remained steadfast to the collective will of the people and refused to be bribed by Governor Amaechi.