Leonard Umunna: A Minister Of God With 2014 Unimpeachable Prophecies Of Integrity 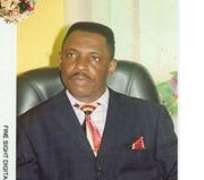 By June 25th this year, the Founder and the Presiding Bishop of the Bible Life Church (BLCC) Cathedral International, Bishop (Prof.) Leonard Nwoma Umunna will be marking his 60thbirthday bash in a grand style. He got into the service of God in 1963 when he was just 9years old and received his baptism of the holy ghost in 1975.He is one of the few ministers of God in Nigeria that knew God at his tender age without backsliding. He was paralyzed for 3and half years but God saw him through in life.

In this year 2014 Victory to Victory night which was tagged as “My Year of Open Heaven Blessings? “Where our amiable and refined God's General prophesied unimpeachable and flawless prophecies to those that attended the glorious Bonanza night on viewers at home, Bible life worshippers and Ajegunle dwellers with dumbfounding testimonies. The Bonanza night was filled to the capacity with crème da la crème of ministers of God, industrialists, educationists, writers, journalists, business moguls, philanthropists and others were in attendance to experience God's anointed servant of repute whose yearly Bonanza night has greatly liberated and impacted many souls from failure to success and other numerous miracles to mention.

The wonder Bishop of our time, Leonard Umunna preached on a Topic: How you can buy the future now.' His scriptural verse was read from Habakkuk 2:1-2 where he ardently accentuated on the need for every child of God to work on his or her vision. He gave some intuitive visions where he said there are two versions of vision in man's life which are the natural and the supernatural. God can give you the vision and you need people to execute the vision for you. The ability not to execute the vision makes your vision die. I have travelled far and wide seeing people having great visions but cannot execute them. I promised to build a house for God and God did it for me and quickly dedicated it to the service of God. Promise made is promise fulfilled.

Again, I promised God that if he healed me from this paralysis, I would build a hospital for him and I did and likewise my educational pursuit in Life. God already told me that I would be a professor and I quickly worked towards that great vision and today I am a renowned professor with many books to my credit. I promised to build a school if God made it for me and today I have one of the best private schools providing scholarships for less privileged ones and others. Vision can be buried alive if you have nobody to execute them for you.

Bishop Umunna also stated in his prophetic cross over night after trilling his worshippers with good songs and dancing steps that the future begins today and yesterday is gone. Buying a good future now, it all depends on each individual that understands why he or she is created on this planet earth. He creatively analyzed on some keys of buying into a good future which are: Embrace a vision with focus because life is fair, take an action, attitude, forgive those that have offended you in one way or the other, work hard, prove your vision and buy the truth and sell it. Nothing ends insult if there is no result. Evidence ends all doubting arguments of one's life.

As a Christian, you are bound to face terrible challenges of life because there is no bed of roses. As a Christian you need to pray to overcome unsympathetic challenges not grouchy. Every problem has a solution. Some of us had awful challenges but we surmounted them through God's power and persistence. He also said some people will say I can't take this, thus this is a spirit of disobedience from God. As a Christian, you must be ready to forgive and keep growing in God's vineyard. They told me in a choir that I was not a good singer but I persisted to learn the act of music, today I am a great musician that preaches and sings with over five albums to God's credit not me. You must be ready to give to God with your heart to fulfill your vision in life.

Moreover, Bishop Umunna prophecies are supernaturally guarded from heaven without qualms. H is a man of God whose few prophecies of every year have graciously come to pass in Bible Lifers. God never made a mistake of calling Bishop Umunna at 9 because he knew what his son carries in terms of spirit-filled anointing. His life has become a great example to Bible Lifers and Nigeria where he remains one of the visible ministers of God in Ajegunle doing greater exploits for Christ. He believes that true evangelism and commitment make Christians get closer to God. Bible life is a ministry of evangelism and nothing more.

He also prophesied some key prophecies to his avid worshippers and Nigeria that many marriages will be restored, cars will be bought, houses will be built, single men and women will be married, university admission seekers will be admitted, jobs will be provided. Those afflicted with one sicknesses or diseases will be healed, many souls will be saved and many closed doors and destines will be opened and all visions that God laid in your hearts, people will execute them for you.

He also gave a testimony of his life that the success land was given to him by somebody from Port Harcourt as a free gift with a little token paid for appreciation. If any man gives bountifully and he will received bountifully according to the Holy Bible. Every vision that God puts in your heart, and be passionate to execute it, and pray for destiny helpers for fulfillment. His prophecies had helped to bring enduring peace to Nigeria and abroad over the years of his divine calling. He also used the case studies of some great people in the bible whose destines tallied with his prophecies and visions like Joseph, Ester, Samson and others and how God made their visions to come to pass in spite of all callous trials of life.

Bishop Leonard Umunna, the father of identifying young dreamers, he gave a platform for young people to display their gifts like choreograph, drama, comedy, testimonies, special songs and others. His end of the year programme before the victory night has greatly impacted souls in all walks of life. It has also featured great gospel musicians and comedians in the time past like Reggae-Gospel Artist, Bauchi (PhD) at English Language and a former lecturer of the Universities of Lagos and Port Harcourt. Bishop Umunna has distinguished himself from the competitive crowd of ministers of God fighting for success in Ajegunle and Nigeria. He remains one of the sought after ministers of God in Nigeria and Ajegunle. In 2013 he celebrated his 50 golden jubilee on the pulpit with a book and Album where all media covered it.

One of the shocking testimonies that drew the attention of the Bible Lifers and viewers at home on the victory night 2014 was a testimony gave by one of the Bible Lifers that ritualists kidnapped her for money and intended to kill her but when he mentioned the God of Bishop Umunna, confusion was set in the camp of this terrific killers and all those that were kidnapped alongside with her were all killed for ritual purposes. Through the God of Umunna, he escaped successfully, what a great testimony and the God of Bishop Umunna?She admitted that the God of Umunna was alive today and tomorrow.

Finally the victory night programme ended with fabulous, overwhelming and glorious testimonies that no enemy can altered.” His words make best of the way things turn out, and it will benefit you instead of defeating you. Bishop Umunna is a man with great anointing of prophesying the future through the holy spirit of God which he once prophesied concerning Late Abacha's government and Olympic football victory of1996 and June 12 election saga where he prophesied that the tension that rose due to this election annulment will not lead to war.

In late 2013, he also said if our leaders do not control their political ambitions, another June 12 will repeat itself but God will take control. All these supernatural prophecies had come to pass over the years. Every servant of God must know his or her calling to avoid diversion of anointing or emulation. He has also called on Nigerian leaders to give the citizenry quality leadership while all young men and women must pursue their visions in life. Today, I am flying with my vision because I grabbed it with mission of accomplishment.