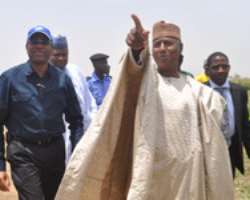 
The Kebbi State Government on Monday approved the immediate release of N1.3 billion to contractors handling the feeding of secondary school students in the state.

The News Agency of Nigeria reports that the approval followed threat by the contractors to stop supplying food to the schools with effect from this Monday.

The amount represents an oustanding debt owed them by the government covering July to December 2013.

Alhaji Nurudden Kangiwa, the Secretary to the State Government, attributed the delay in effecting the payment to the verification of the total students' population benefiting from the gesture.

Kangiwa said the verification was to stop the mismanagement of the scheme, adding, 'the amount owed them would be settled promptly as the anomalies had been cleared'.

The SSG assured all contractors working in the state that the government would continue to meet its contractual obligations at all times, but said payments must henceforth follow due process.

He said that the administration had made massive investment in the education sector with the construction of 250 additional schools and would do everything possible to keep the system running to ensure improved performance of students. NAN