Address Me As ‘Miss’, Not ‘Mrs’—Chimamanda Adichie Insists 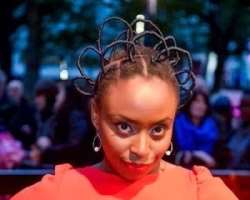 Chimamanda Ngozi Adichie, Award winning novelist, has left not a few people wondering if she is separated or divorced from her husband. She recently granted an interview to some journalists in Lagos and In the interview she insisted that she wanted to be addressed as 'Miss' and not 'Mrs'. It will be recalled that Chimamanda got married to her medical doctor husband, Ivara Esege, some few years back. Here are the excerpts:

Before we start, please, I just want to say that my name is Chimamanda Adichie. That's how I want it; that's how I'm addressed, and it is not Mrs. but Miss. Ms: that's how I want it. I am saying this, because I just got a mail from my manager this morning. It seems that there are people who attended the church service, and they wrote about it, addressing me as Mrs. Chimamanda (Esega). I didn't like that at all. So my name is Chimamanda Adichie, full stop!

This is because it is also responsible that people be called what they want to be called.

You started by telling me that you're not “Mrs.”

(Cuts in) My name is Chimamanda Adichie. If you want to put label for me, put Ms.

But people know that you're married. As an Igbo girl, you know our culture…

(Cuts in again) What does our culture do? Let me tell you about our culture. This thing that you are calling our culture – that when you marry somebody, you'll start calling her Mrs. Somebody – is not our culture; it is Western culture. If you want to talk about our culture, you need to go to people in real Igbo land. But it is true. My grandfather's name is David. His name is also Nwoye. They call him Nwoye Omeni. Omeni was his mother. You know why? It is to help distinguish him, because there are often many wives. So, it was his mother that they used to identify him. They know that all of these people came from the same compound, but whose child is this one. You may go and ask people who is Nwoye Omeni, and they'll tell you it is my grandfather. So, conversation about culture is a long one. I don't even want to have it.

But, at what point would you change your name?

But culture is dynamic…

Exactly my point, which is why this is new. If culture is dynamic, you cannot use it as conservative tool. We can-not then say it has to be this because it is our culture. My point is that it is a new thing. Things are changing. We live in a world now where women have a right to bear the name they want. So, we cannot say this is how we do it. If some women want to do it that way, that's fine! God bless them. Some women won't do it. I am one of those women, and nobody will come to use culture to tell me that I should do what I don't want to do.