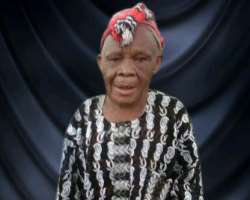 Even as the Onwubiko family of Arondizuogu in Onu-Imo local government area council of Imo state prepares to bury their patriarch Mazi Cyprian Onwubiko on Friday March 7th 2014, the Federal Attorney General and minister of justice Mohammed Bello Adoke [SAN] has applauded the legacies of the late Mazi Cyprian Onwubiko and urged Nigerians to emulate the virtues of simplicity and spiritual excellence bequeathed by the departed.

The justice minister also stated that; "Please accept the heartfelt condolences of the honourable Attorney General and his prayers that God will grant him eternal rest and the entire family the fortitude to bear the pains of this great loss".

In a statement by one of the sons of Mazi Onwubiko and the National Coordinator of Human Rights Writers Association of Nigeria and an erstwhile Federal Commissioner of the Nigerian National Human Rights Commission [NHRC] Comrade Emmanuel Onwubiko also disclosed that the Deputy Senate President Senator Ike Ekweremadu, Speaker of the Federal House of Representatives and his Deputy Honourables Aminu Waziri Tambuwal and Emeka Ihedioha had separately poured encomiums on the legacies of honesty and community leadership bequeathed by the departed [Mazi Cyprian Onwubiko] who during his life time was a successful entrepreneur in Northern Nigeria and a Community leader on his retirement to his country home in Ndiuche-Etiti, Arondizuogu, in Aro-Umuduru Autonomous community of Onu-Imo Local Government Council of Imo State.

Other prominent Nigerians who have sent in their condolences include the Federal Attorney General and Minister of Justice Mr. Mohammed Bello Adoke [SAN]; Governor Magatakarda Wamako of Sokoto State and the Chairman of the Revenue Mobilization Allocation and Fiscal Commission who is also a Fellow of the Nigerian Society of Engineers Elias Mbam.

In his letter to the family of late Mazi Cyprian Onwubiko, the Senate President commiserated with the Children and the dear wife left behind by the departed and prayed God to grant his soul everlasting peace in the Heavenly abode.

The Deputy Senate President wrote thus; "I received with a deep sense of loss the news of the sad event of the passing on of your dear patriarch, late Mazi Cyprian Osonduagwuike Onwubiko".

"This is certainly a very grievous loss to the entire Onwubiko family and the rest of us your friends and well-wishers", he further stated in a letter he personally signed and addressed through Comrade Emmanuel Onwubiko of the Human Rights Writers Association of Nigeria [HURIWA] to the family.

The Deputy Senate President who affirmed that he is convinced that the departed lived a fulfilled and happy life full of selfless service to Nigerians state that; "I however encourage you and the rest of the family to find solace in the fact that he lived to a ripe old age and led an accomplished life of selfless service to God and humanity. Although his excellence in community leadership and sense of industry will be highly missed, it is also gratifying to note that his light will continue to shine through you, especially in the propagation and defence of human rights in Nigeria".

He spoke further; "I send my deep condolences to you, the Onwubiko family and indeed the HURIWA over this grievous loss. I share in your sorrows over his death and join you in prayers for the peaceful repose of his gentle soul.

While wishing you fortitude and grace as you pull through this challenging moment, please accept, my brother the assurances of my highest regards and support always".

Conversely, the Deputy Speaker of the Federal House of Representatives Honourable Emeka Ihedioha in his three paragraph letter of condolence stated thus; "The news of the death of your father, Mazi Cyprian Osonduagwuike Onwubiko, left me with a heavy heart".

"Mazi Onwubiko was a man with a rare and exceptional character. A remarkable community leader, his honesty surpasses his years. Additionally, he distinguished himself as a man who feared God. Notably, a devout Catholic, his sacrificial living spoke to the lives of so many people. Thus, this man of timber and caliber will be greatly missed", he asserted.

The Deputy Speaker who hails from Imo state also consoled the Onwubiko family members thus; "You are not alone in mourning this huge loss at this time, my family and I commiserate with you while praying for repose of the departed soul. Accept my sincere heartfelt condolence".

The Chairman of Revenue Mobilization Allocation and Fiscal Commission Engineer Elias Mbam in his condolence letter stated thus; "On behalf of Members, Management and Staff of the Revenue Mobilization Allocation and Fiscal Commission (RMAFC), I wish to commiserate with you and your family on the passing away of your dear father, late Mazi Cyprian Osonduagwuike Onwubiko; who slept in the Lord on January, 14th , 2014 at the ripe age of 87, after a brief illness".

According to the boss of the Revenue commission in his letter sent to the Onwubiko's family through Comrade Emmanuel Onwubiko; "The demise of your dear father at the ripe age of 87 when you needed him most is indeed a painful and sad loss. His death is an irreparable loss not only to the Onwubiko family but the entire people of Ndiucheetiti-Arondizuogu Community in particular and Imo State in general."

"We should however be consoled by the fact that the late Mr. Onwubiko, Snr. lived a fulfilled and accomplished life. He will be specially remembered for his contribution to the development of his community and the legacy of integrity, honesty and service to humanity he bequeathed to his family", Engineer Mbam concluded poetically.