Adeboye at 72: 'Church constitution doesn't provide for his retirement' 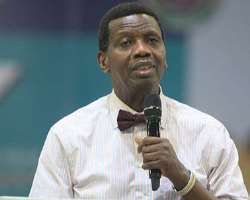 At the national headquarters of the church in Ebute Metta, Lagos, the Special Assistant to the General Overseer on Administration and Personnel, Pastor Johnson Odesola-led thousands of parishioners to pray for the good health of the General Overseer, who was unavoidably absent at the service as he was said to take time off to pray at home. There were several prayer sessions by the children, teenagers, youths, men, women and elders of the church for the cleric who at the beginning of the year, flagged off 100 days fasting and prayer, obviously to avert the multi dimensional security challenges currently threatening to tear the nation apart.

Pastor Odesola confirmed that the G.O. always presided over the first Sunday service of every month at the headquarter church, 'but usually he doesn't go out of his home on March 2, because he spends the whole day praying for God's leading. That's why he was unable to make the service and I sent letters to all our branches across the globe to spend today (Sunday) praying for our leader.'


According to the S.A., Pastor Adeboye usually spend quality time to waite on the Lord for a new direction, noting that there are many challenges including the construction of new auditorium which has commenced and all that require God's intervention.

Pastor Odesola also described all those who are calling for the retirement of the 72 year old General Overseer as ignorant of the church's constitution, saying that there is no where in the legal document that says he should resign or retire.

'Whereas the constitution provided that the deputy and assistant general overseers are appointed to retire at 70 and enjoy their retirement benefits for life, there is no such provision for the general overseer,' he stated, adding that on account of such ignorance even among the pastorate, the governing council had agreed that the constitution should be printed into a book and made available to all workers in the church.

Continuing, Pastor Odesola who disclosed that the General Overseer had thrown his weight behind the proposed National Conference but would let the umbrella body speak for the Church, added that the problem 'we have in the church is akin to what operates in the rest of the continent.

'People have papers but they don't read them. We have a compendium about the day to day running of the church but people just don't read.

'The people who are agitating for the G.O.'s retirement because he is over 70 years are ignorant and the Bible says you don't become foolish,' he explained to the journalists. Pastor Adeboye was born on March 2, 1942 at Ifewara in the present day Osun State to Moses and Esther Adeboye,  both indigenes of Ifewara, which is about midway between Ilesha and Ondo towns.

Pastor Adeboye has a PhD in applied mathematics from the University of Lagos, and worked as a lecturer at the universities of Lagos and Ilorin. After joining the RCCG, he began working to translate the sermons of its then pastor/founder, Rev. Josiah Olufemi Akindayomi, from Yoruba into English.

In 1981 Adeboye was appointed General Overseer of the church, taking over from Papa Akindayomi, who had died the previous year. Vanguard