Chief Onyema Ugochukwu: Saluting The Spirit Of Courage And Modesty In Abia Leadership 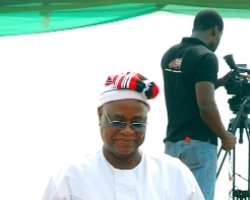 A lot of people today get involved in political activities in Nigeria for many odd reasons not necessarily bordering on ideology and philosophical principles which should be the potent factor. In most cases and probably due to the economic downturn, people are induced by hunger, an unquenchable love of money and unemployment of sorts, but there are still people who do so to provide genuine leadership and solve critical societal problems and in the process, endow the lacking needs to our people.

One of such men is Chief Onyema Ugochukwu: A renowned and accomplished Journalist. Chief Ugochukwu was the pioneer chairman of the NDDC and made news when he overcame all antics employed by the previous administration in Abia to deny him the exulted position. It was a case where surprisingly, the Abia senators were hoaxed into reluctance in supporting their constituent who had the rare privilege of being nominated to the celebrated chairmanship of the NDDC by President Obasanjo in the year 2000.

As the governorship candidate of PDP in Abia in 2006, except for the excesses of some overzealous followers, he ran a credible electioneering campaign, touring the cities and suburbs, making speeches and addressing issues. He engaged in a twisty aggressive legal battle against Chief T.A. Orji and the PPA party, over the results of the elections and the propriety of Chief T.A Orji's candidacy. When the legal chips were down, it did not need any soothsayer to tell him that the political and legal games were up.

Not a man to hoodwink people, Chief Ugochukwu, in an emotion laden voice addressed his followers and acquainted them with the truth which was that having tried everything possible, that it may not have been the wish of God for him to govern Abia.

This frankness did not go down well with many members who thought that if they can't win, that at least, they can subvert. But Chief Ugochukwu deftly ordered them to hold their fire and come out of their trenches.

When the high-powered delegation led by the PDP Chairman, Mr. Okwesilieze Nwodo came to Abia 8in 2010, urging T.A. Orji to join PDP, Chief Onyema and the Governor made a genuine pact which was mutually adhered to. When we talk of exemplary and comprehensive peace process, the Abia state experience is of high repute and has provided a conflict resolution template at home and abroad. Every politically aware person in Abia knew the level of calumny and hatred where followers clashed in courts and engaged in name-calling and other unedifying acts. According to an Israeli statesman, General Moshe Dayan, 'if you want to make peace, you do not talk to your friends, you talk to your enemies.'

T.A Orji's courage and decision to cross the yawning chasm of opposition to initiate dialogue with Chief Onyema Ugochukwu watered the ground that encouraged other Abia leaders on both sides of the party divide to talk with each other, and Abia is enjoying a huge ambience of peace today because these leaders talked, agreed and have all kept their parts of the bargain.

From balanced deductions, much of these gains of Abia would not have cascaded down to the lowest party rung if Chief Onyema did not put his heart into it. He has granted interviews to the press and shocked most of his followers and admirers, who did not expect him to be brutally frank. In the Union weekly of December 1, 2013 page 10, Ugochukwu, the team player avowed, 'Abia State PDP has never been more united than it is now. It has also never been more peaceful than it is now. And a lot of that credit goes to the governor, Chief T A Orji, who has done so well in bringing Abians together.'

As Chairman of the Grand Civic Reception organized by The Ikwuano/Umuahia people, the mammoth crowd of February, 15, 2014, at defunct Umuahia Main Market, was thrilled when he acknowledged the efforts of the governor in changing Abia, especially the legacy projects. As he observed, the primary school in Umule his village, which has been transformed into a model School is a huge example.

For many of us who cry more than the bereaved on either side, he affirmed that Ochendo has done most of the things he wished for Abia and probably borne in his manifestos, so why should he antagonize? As is manifest from his speech, his genuine quest was to work and build Abia, not the ego-driven ambition of many whose only wish was to be addressed as His Excellency.

As a huge lesson to us, the peace process in Abia wouldn't have been encompassing if Chief Ugochukwu continued sulking and throwing spanners at work over his loses. In these days that duplicity has become a political virtue, Chief Ugochukwu placed all his political cards on the table and buried the hatchet with its handle. This further helped to douse the tension and acrimony which was simmering between the two inseparable clans of Ibeku and Ohuhu. Those who claim to be statesmen and those who are aspiring to be one should emulate this profuse liberalism.

Professionally, Chief Ugochukwu is an economist, trained in the famous UNN. Two years after a stint in the Central Bank of Nigeria, he abandoned a lucrative career in the apex bank as an Economic Research Assistant for his beloved journalism and made the best of it as he rose to the positions of chief Editor with West African magazine, Editor in Chief, The Daily Times and met over ten presidents like Clinton, Maggie Thatcher, Nelson Mandela, Fidel Castro, P J Patterson of Jamaica and many others.

Chief Ugochukwu having bagged the Commander of the Order of the Niger is qualified for the Nobel Peace Prize and other international honors.

It should be noted that Peace at times becomes elusive like a moving target, unable to come into the shooting range: if in doubt ask the leaders of the State of Israel, Central African Republic, North and South Sudan, Mozambique and Syria.

From the above, those who arrogate to themselves to be the Master Strategists and scheme fruitlessly to sneak into the main lounge through the backdoor, when the front door is open, should consult chief Ugochukwu or may as well sniff facts out of his modesty and humility

Abia has been peaceful and instructively, many from the Ugochukwu camp who have been graciously appointed into the people-oriented administration of Ochendo Global have done their best in terms of service and delivery. Good leadership from the top is a tonic that catalyzes the masses. Let us not trivialize this political and social milestone in Abia. Peace is a two way thing between the leaders and followers and those involved should play fairly.

All these elucidations above fall in line with the prescription of Charles Keller, president, Rotary International who said, 'if we do not find the part to peace, whatever else we do will not make much difference.' Ochendo sought the part to peace which has become a game changer in Abia.