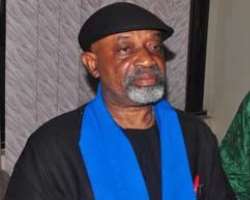 
The Anambra State governorship election petition tribunal sitting in Awka yesterday agreed with Dr. Onyechi Ikpeazu, SAN, council to the governor -elect, Chief Willie Obiano of All Progressives Grand Alliance, APGA that many paragraphs in the petition filed by Senator Chris Ngige, the governorship candidate of All Progressives Congress, APC, in last year's election were not issues to be determined by the election petition tribunal.

In the ruling, the chairman of the tribunal, Justice Ishaq Bello said a matter such as qualification of Obiano based on the alleged double voters' card registration was an issue for adjudication by a high court and not for an election tribunal to dabble into.

Following the ruling, which appeared to be the major plank of Ngige's petition against the declaration of Obiano as the winner of the election by the Independent National Electoral Commission, INEC, the APC candidate said he would appeal against the ruling.

His counsel, Mr. Rotimi Akeredolu, SAN, and Chief Emeka Ngige, SAN, said after the tribunal sitting that they would head to the Court of Appeal in Enugu to challenge the ruling.