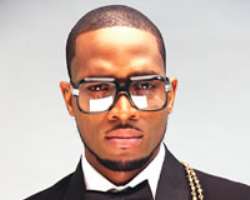 
There have been rumours that the deal between the Koko Master, D'banj and American rapper Kanye West is over.

D'Banj, had earlier in the week, edited his bio on Twitter removing 'G.O.O.D Music'.  Of course, this act raised eye-brows with not just a few, claiming things are no longer at ease between the Koko Master and the American rap artiste.

Those who claimed to know, alleged the partnership got bitter since what D'banj could gain from it was Kanye's appearance on the Oliver Twist video, a verse in the Scapegoat remix and a not more than three seconds appearance in theMercy video.

Apart from that, they also claimed D'banj 'gained' paying hefty fees to have G.O.O.D Music acts, Pusha T, Big Sean and affiliate 2Chainz  to feature on his annual show, the Koko Concert.

But in a chat with Saturday Beats, D'banj's manager, Tony Nwakolor, claimed the news was false in its entirety.

'It is a lie that D'banj has left G.O.O.D music. He changed his bio on his twitter account and people started forming all sorts of story. He is still with Kanye West,' Nwakolor said. Punch