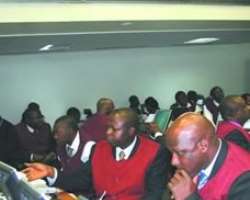 Market gains N333bn in 2 months
By MADUKA NWEKE
Monday, March 15, 2010
Indications that the days of bearish trend in the Nigerian capital market are over have started to show as the stocks especially in the blue chip categories that lost below book value are regaining their price categories.

The major market indicators used for measuring market performances are also pointing northwards. Market capitalization of traded equities gained N333 billion between January 22 and March 10, 2010 while the All-Share Index (ASI) added 1,382.23 bases points. This implies that more investors are assessing facility of the market to increase their wealth.

As at Friday January 22, 2010 market capitalization of traded equities stood at N5.305 trillion while the All-Share Index was at 22,030.18. As a matter of performance, the market capitalization and All-Share Index rose to N5.638 trillion and 23,412.41 respectively on March 10, 2010. The highlight of the performance was that even the troubled banks rattled by Central Bank of Nigeria (CBN) audit since August 14, 2010 also increased in price per share.

The banks rattled by the Central Bank of Nigeria (CBN) audit and reforms in the banking sub-sector have reeled off the hook of resented stocks and are now playing better games with price. CBN on August 14, 2009 evoked certain section of BOFIA and jostled the industry with some banks tagged, troubled being at the receiving ends.

The pronouncement of the banks as troubled made investors to exit the banks by offloading their holdings in the stocks. This massive offloading aligned with the principle of demand and supply helped to crash their prices. As many stocks were put out for sell, the number of investors chasing huge volumes of stocks decreased resulting in the crash of their prices.

For instance, prior to CBN pronouncement in August, some of the stocks were investors' delight. This is because most of them were seen from the angle of huge returns on investment which fuelled investors' demand for their shares. Although, the stocks were not the highest selling in terms of price surge, they were not within the lowest sellers in terms of price rise and volume of transactions.

As at December 24, 2008 even when the meltdown was still on, FinBank sold at N4.21 per share, Intercontinental Bank was selling at N11.21, Oceanic Bank International sold at N11.69 per share, while BankPHB sold at N8.90 per share. Others included, Spring Bank was selling at N5.59 while Union Bank and Wema Bank sold at N16.45 and N14.29 per share respectively. But immediately CBN pronounced the banks troubled, massive exit hit each and every one of the audit-affected banks.

By August 3, 2009, few days to the pronouncement, FinBank sold at N2.60, Intercontinental Bank N7.81, Oceanic Bank International N6.65, Spring Bank N5.59, BankPHB N6.20, Union Bank N16.81 and Wema at N3.80 per share. With the impression created that the banks share do not worth anything, investors increased their selling tempo resulting in further crash of their prices.

The banks after some weeks of being in oblivion, investors beamed investment searchlight on them resulting in little appreciation that crept in. An instance of this was that on January 6, 2010, Afribank sold at N2.62, BankPHB N1.51, FinBank N0.58, Intercontinental Bank N1.85, Oceanic Bank International N1.94, Spring Bank N0.70, Unity Bank N0.91, Union Bank N6.15 and Wema Bank selling at N1.06 per share respectively.

However, with reactions from the investing publics rekindled their interests in the banks more so as they have bottomed out their last price drops. This led to investors search for the stocks to load with none of the holders being ready to sell. The stocks therefore become scarcity goods that are queued for and only sold on bids.

As at February 1, 2010, Afribank started selling for N2.96 per share, FinBank N0.78, Oceanic Bank International N2.40, Intercontinental Bank N2.38, Spring Bank N1.17, Union Bank N6.30, Unity Bank and Wema Bank sold at N1.05 at N1.17 per share respectively. Investors who spoke to Daily Sun believe that the era of identification of the troubled banks are over because they will not catch up with other stock as a result of high demand for the shares that would in turn result in price increase.