John Dumelo Says People Are Giving Him Pressure To Marry 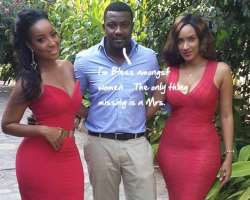 John Dumelo has been seen playing love scene with Yvonne Nelson lately but they both have denied anything romantic happening between them, for John Dumelo who got burnt with women scandals in 2013, he is not ready to be pushed into marriage no matter the type of pressure that his family and fans are mounting on him, the actor is not interested at least for now…Not even to Yvonne who may have been a perfect match for him.

People rush into marriage and their marriage plummet within a short time, John said, whilst some people relax and wait for God's time and enjoy the best marriages and this is where he belongs. He has disclosed that marriage is not compulsory and he does not really understand why people should be coercing him into settling down. For those who are putting pressure on him, he simply said that getting married is not a nine-day wonder and one can't just wake up and get married.

John who donated some items to widows through his John Dumelo Foundation, said that the foundation has assisted over 1000 school children across the world last year and this year, they are looking forward to touching many more lives. He still have eyes in opening his new hotel and apartment called 'Maselo' which is still underway.

Listen To D'banj's 'Oyato': The First New Single After The Break Up With Mo'hits Records