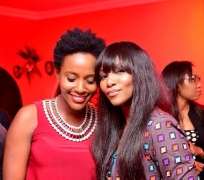 Contrary to the popular cliché that, 'there is no new thing under the sun'; First Weekly can say that there are still few new things under the sun. Though there have been cases where a man sleeps with his daughter, it is still strange to hear that a public figure sleeps with someone who sees him as her father to the extent of impregnating her.

The story you are about to read is not a scene from a movie but a true life story. The matter involved a popular face in the movie industry in the Yoruba section of Nollywood; Babatunde Omidina, well known as Baba Suwe.

The popular comic actor allegedly slept with the daughter of his late wife, Monsurat Omidina aka Moladun Kenke Lewu, Omolara and aborted pregnancies for her four times.

Impeccable sources informed First Weekly that Baba Suwe, who was nabbed few years ago by men of the Nigeria Drug Law Enforcement Agency (NDLEA), while on his way to Paris, France for allegedly being in possession of a substance believed to be narcotic, has now wrecked the marriage of his Omolara.

The lady is said to be the second child of the late Moladun, who she bore for another man before she got married to Baba Suwe.

It will be recalled that the death of this late comic actress was shrouded in controversies as some believed that she was killed by her actor husband.

Sources told us last week that friends of the late woman are still aggrieved that she was wasted by the man she loved so much.
Baba Suwe was believed to have deflowered Omolara, and she reportedly got pregnant for him for the first time, when she was 14 years old, and was in primary six.

First Weekly learnt that the late Moladun was totally devastated, when she initially got wind of the sad development, but it was learnt that the prominent actor attributed the act to the 'Devil'. However, one thing led to the other again and Baba Suwe allegedly got Omolara pregnant.

Sources said that the second pregnancy got the same fate as the first and the illicit affairs allegedly continued till the lady became pregnant for the make-believe act for the fourth time.

Insiders swore that Baba Suwe was getting away with his dastardly act unchallenged through diabolical means as his wife and daughter could not muster the confidence to cry out to members of the public. We were also told that the duo were afraid that people would not believe their tales as such an occurrence is strange in this part of the world.

Our informants told us that the marriage of the actor's step-daughter has crashed because she could not conceive for her husband.
The young lady is said to be unhappy at the moment as her husband has allegedly impregnated another woman.

We gathered that her in-laws pressurized her husband to try another woman as they were confident that the problem was not from their son.

Our sources revealed that friends of Omolara are now bitter that her father ruined her life, while he is enjoying his. Some of the aggrieved friends of the lady and those of her mother are said to be placing curses on the celebrated actor for the havoc he wrecked on his step- daughter.

Further information made available to us has it that Baba Suwe is now dating an actress named Sheri Ilerika, who he once dated before he married the late Moladun.

Efforts made to reach Baba Suwe on the phone before we went to press last week proved abortive, but a close pal of the movie star said that the whole story was a ruse.

He explained that it is just another lie from the camp of Baba Suwe's enemies, who were out to ruin him because of his popularity.

According to him, 'Baba Suwe loved Moladun so much and I can tell you that the story is coming out because the man has decided to move on with his life after the unfortunate death of the talented woman.”

We are still following-up tips on how Baba Suwe allegedly killed Moladun and his several efforts to cover up his deeds from members of the public. Just keep a date with us in our subsequent editions.