I Was Initially Scared Of Going Solo--KCee 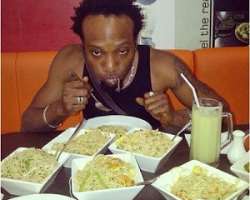 KCee, former member of the defunct KC Presh music group, has disclosed that he had thought that breaking away from the group would affect his music career, but with recent developments, all things have worked in his favour.

Since he parted with his friend, KCee has been enjoying the spotlights shinning on him. However, Presh has been unlucky with fame as not much has been heard from his camp.

KCee said "We thought we've been doing it for 12 years and we needed a change because the only thing that is constant is change. Just like the Yoruba adage that says that 20 children cannot play for 20 years.

"Although we never saw this coming, we always thought we would be together forever, but at the end of the day, we are doing it and we are loving it.Initially, I thought going solo was going to be stressful.

"I thought about how people were going to accept me as a solo artist knowing full well that I had been with Presh for about 12 years. Both of us were scared, but I thought that so far we can make people believe that we are good together as a group; we can also make them believe we can do it without each other and that was the belief.

"Even if you are twins, your focus can not be the same, your spirit and your drive might not be on the same platform at all times."

DEEVATUDE: Genevieve Nnaji is Astonishing. Six Reasons Why We Agree to This.

Where Is Mosun Filani?