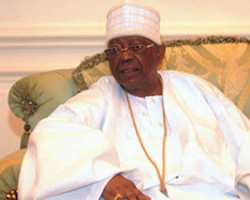 
Otunba Subomi Balogun, the founder of the First City Monument Bank, will turn 80 on March 9, 2014. He speaks on some remarkable events in his life with some journalists in Lagos…

Why he is called the Grandmaster
I had just retired from the bank when suddenly we were told to raise our share capital to N25bn. I told my people in the bank that I was going to lead the campaign to raise the capital. I told a highly revered statesman that I wanted to come and see him to sell some of our shares to him. He said, 'You have been selling other people's shares, now you are coming out of retirement to sell your own?' I said, 'Yes.'  He said, 'Do you play chess?' I said, 'I don't play chess.' He said, 'That is what we call the Grandmaster.'

I liked that name and I asked that T-shirts be made for everybody; workers and relations with the name on them. We went about town with the T-shirts. That was how the name stuck. Many people did not give us any chance but our shares were oversubscribed. We ended up acquiring six banks. Later, we acquired Finbank, which was an amalgamation of four banks. These are some of the wonderful things that God has done for me.

The challenges of setting up a bank
I have a 'can do' attitude. At our time, no individual could say that he was setting up a bank. Even if you wanted to do that, you had to bring in an expatriate. So, there were a lot of sceptics who thought that the bank would fail. It is the same that applies now. There may be problems but I have great hopes about the future of the industry because it is the mainstay of the economy. Without an effective banking system, the economy cannot be oiled. I am still optimistic that we are just scratching the surface, we have not gone far. It is part of my 'can do' attitude. I don't believe that anything is impossible with God on my side. This is what is happening in the institution that God helped me to establish.

How he got a banking licence
When I wanted to set up the bank, to many people, it was unheard of. Some people even thought I was going to use it to support a particular politician. So, they moved against my getting a licence.

But Alex Ekwueme, the former vice-president, and I had been friends before he joined politics. So, one day, he was coming to the cathedral and I planned with my wife that we were going to waylay him. While he was coming down the aisle, I broke the cauldron and pulled his clothes, while my wife pulled his wife's clothes. His security details wanted to move but he waved them away and asked what the problem was. I asked him, 'Mr. Vice-President, where is my licence?' He said I should see him at Dodan Barracks. He told me that I should not worry my head that he would handle it at the Federal Executive Council meeting. The following Thursday, Alex (Ekweme) asked Chief Yomi Akintola, the Finance Minister, to call me that my licence had been granted.

I am just giving you some landmarks that convinced me that I am a chosen child of God. In my career, there were so many battles, some of which would consume any mortal but somehow I managed to survive each of them. How then will I not acknowledge my God who loves me and remains faithful to me?

The FCMB story
My family and I were in the chapel in my house praying to God for the way forward after I was cheated out of the investment bank I helped start for Nigerian Industrial Development Bank, when my son said 'why are you worrying yourself on being a boss of another person's business, why not start your own.'

I have a very strong character. There is nothing that I did that I wish I had not done. I have no regret over any of my past actions. When I was starting FCMB, I said I was coming with a culture of excellence and I defined what the culture of excellence would be. I was the first to create a special dining room for banks. I was the first to insist that my staff members should be wearing dark suits. I wouldn't say that I am anything more than a human being but there was the unseen hand of God holding me. If I come again, I would do all that I have done.

In 1962, I came to Lagos and became the Assistant Parliamentary Counsellor of the Federation. It was while I was doing this that the Nigerian Industrial Development Bank was being set up by the World Bank and I applied as a secretary.

When I wanted to become the Secretary of the NIDB, someone said, 'Balogun can only become Secretary of NIDB over his dead body.' I was scared but I still continued praying. I was worshipping in the cathedral when an Indian gentleman walked up to me and said, 'I think I have seen your face before.' I told him that his face was also familiar and asked who he was. He introduced himself as the General Manager of the NIDB. I told him that I was in his office for an interview. He told me that the position would be re-advertised. It was. And I got the job.

His philanthropic life
I did not start philanthropy after I became a banker. I remember I was just about 36 when I set up some scholarship funds to train students in some schools in Ijebu. I gathered that at the last count, about 300 university graduates have benefited from my scholarship.

One of the schemes is in honour of my mother, and another is in honour of my father. But why particularly am I showing interest in children? Many years ago, the management of the University College Hospital, Ibadan, saw the dilapidated condition of their equipment and the whole environment, and they started inviting some distinguished Nigerians for help.

On the day I was invited, the late Chief Adebowale of Adebowale Electrical Industries, and Chief Michael Ibru and I were invited. We were being taken round the University College Hospital, and a cousin of mine, a physician, Prof Olumade Adeuja, said; 'Brother, come and look at the children's ward in the UCH.'

I followed him. When I got there, a few things happened that really brought tears out of my eyes. Some of the children's beds were an eyesore.

Then I swore that I will spend the rest of my life looking into the welfare, survival and healthcare of children. So I adopted the children's wing of the UCH.

That was when I just started the bank. I told the management of the UCH that I would adopt the wing. I decided to refurbish the whole place, restructure it, changed the linens, bought electrical fittings, air conditioners and changed the whole place. It is still one of the best wings of the department of the university college.

Years later, to my surprise, I got a letter from Prof Osuntokun, then Medical Director, that the university council and then Minister of Health, Prof Olikoye Ransome-Kuti, had agreed that they should name that wing of the UCH after me.

It is one of the best maintained there and I do regular maintenance.

His style
I think it is God-given. People talk about my wearing white. I just felt at a point in life that I wanted to be pure and the nearest colour to purity is white. So I choose white as my colour. My houses, my cars, everything is white.

Style has to do with being enlightened. Style is something unique to you; something that can be ascribed to you alone

Achievements after 80
I want to spend the rest of my life giving my service to God and humanity. I want my God to give me the opportunity of showing my appreciation. I am not asking for anything again in life. All the beautiful things of this life, God has given me. I now have a duty to devote the rest of my life to serve my God; to serve humanity and to continue to do things like what I have done with the Otunba Tunwase National Paediatric Centre because at the end of the day, none of us will drive a Rolls Royce to the grave. You won't carry your house to the grave. When the final call comes, you will just open your hands and say, 'God, here I am.'