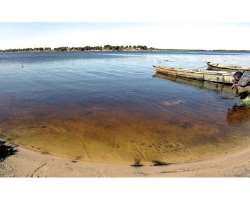 Grim revelations that Lake Chad, once one of Africa's largest bodies of fresh water has shrunk by about 90 percent in fifty years with serious implications for human sustenance and ecosystem clearly justifies the desperation of member-countries of the Lake Chad Basin Commission (LCBC) to source for N2.1 trillion ($14.6billion) lifeline to replenish the lake.

The ambitious move to stem the crisis, however, seems to be coming a little too late in view of the damage already done and the enormous task of transferring water from the Ubangi River, the chief northern tributary of the Congo River - up a plateau more than 200 meters above, into Lake Chad. How far the LCBC member-countries of Niger, Chad, Cameroon, Libya, CAR and Nigeria can go with raising funds from donor agencies and development partners is another worry. Amid competing interests for available foreign funds, it can only be hoped that the prevailing regional insecurity would also not prove a major discouragement to donors.

Against the backdrop of the phenomenal cost of redressing the gloomy prospects of severe water stress in the lake region, experts' warning that inaction could be more expensive in the long term is instructive. The belief is that the planned water transfer from the Ubangi should at least play a role in balancing rate of evaporation, natural seepage into the ground and consumption, including human-induced wastage.

Again, arguments in favour of water transfer should not take anything away from those of the anti-transfer proponents who see the action as a needless way of fighting nature, considering the extent of recession after years of neglect. The suspicion: N2.1 trillion may not have the desired impact at the end of the day. The argument: if such a huge lifeline would be needed, why not allow Chad to dry up?

Herdsmen, fishermen and farmers have relied for generations on the rich soil of the basin but they are now struggling to survive as extinction looms. An atmosphere of despair is palpable, understandably. A more desperate action could be needed by the regional body to stave off danger of Lake Chad becoming history.

Factors aiding the lake's journey to extinction include overgrazing in the region, loss of vegetation and excessive deforestation. On the card also is large or irresponsible irrigation projects. Between 1953 and 1979, irrigation only put a minor impact on the ecosystem but between 1983 and 1993, irrigation quadrupled. Environmentalist Paul Ghogomou of the University of Younde also listed desertification, climate change and continuous diversion of water from the rivers that feed the lake, especially from Chari being fed by its tributary, the Logone in Cameroon. (It is claimed that this provides over 90 percent of Chad's usual volume).

Above all, Lake Chad simply has been a sub-regional sore that was allowed to fester. Among the questions that need to be addressed, are: How can the potential of possible climate-induced water and food crises be defused? How should an increase in climate-induced migration be addressed? Then, how can the need for increased regional cooperation in the face of a rapidly disappearing lake with trans-border consequences be tackled?

Frankly, the dilemma that Lake Chad has presented the LCBC countries calls to question their own water management, collectively and individually. If any investment was made in that regard at all in years past, it was not enough. The information that a joint environmental audit is being carried out to verify if the signatory states of N'Djamena 1964 Convention comply with the standards and best practices of water and resource management towards the restoration of the lake is a relief.

LCBC has been talking of efforts to implement more sustainable solutions including the construction of a retention dam at Palambo - upstream of CAR's capital Bangu. Talk, however, is cheap. So LCBC must act fast.

The lake may not be the first to disappear but for its strategic importance to the continent as one of the four largest in Africa in its productive days, member countries must work hard to save millions of lives that are dependent on it.