Waconzy Says He is Not Broke 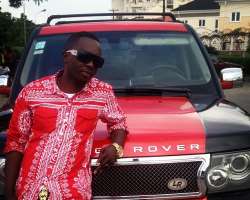 Waconzy wants fans to know that he was not begging to join President Goodluck Ebere's campaign wagon because he needed money especially when he tried his luck and sent out a tweet to the President through his media aide, Reuben Abati. Waconzy asked him to follow him on twitter.

He said “People will always talk; let them talk. It is funny when people say I am going broke because I just got a 2013Mercedes Benz worth N15m. Am I broke? The tweet was not to ask for my money back but to show my support as a Niger-Delta boy.”

He is said he would love to work with the president “I also would love the president to appreciate my work and carry me along in projects that he embarks on too. I believe people that are saying all this things are jobless,” he said.