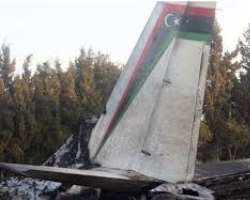 
A Libyan military plane carrying doctors and patients has crashed in Tunisia, killing all 11 people on board, officials say.

The Antonov plane came down in a field near Grombalia, about 40km (25 miles) south of the capital, Tunis.

The BBC’s Rana Jawad in Tripoli says Libyans often get medical treatment in Tunisia as standards are higher.

The crash is said to have resulted from engine failure.