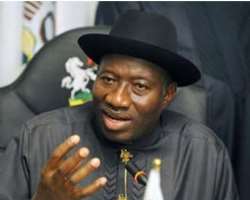 Farouk A.
Ahmed as the Executive Secretary of the Petroleum Products Pricing Regulatory Agency (PPPRA) with immediate effect, a Presidency statement said Thursday.

Mr.
Ahmed will take over from the incumbent Executive Secretary, Mr.

Reginald C.
Stanley who is retiring after 35 years in service, the President's spokesman Reuben Abati said.

The incoming Executive Secretary, who hails from Sokoto State, is the current Managing Director of Nidas Marine Ltd.

, a subsidiary of the NNPC.
The statement adds that Ahmed comes to his new job at the PPPRA with over 28 years' experience in the oil and gas industry and a sound commercial and trading background having held senior positions in the downstream sector of the oil and gas industry including Manager, Crude Oil Programming,  Nominations, and Shipping and Terminals.

President Jonathan thanks the outgoing Executive Secretary of the PPPRA, Mr.

Stanley for his meritorious service to the nation and wishes him well in his future endeavours,' the statement added.