Arms proliferation ahead of 2015 – Punch 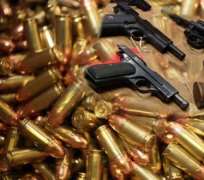 
From three states alone, the police have mopped up a large quantity of arms that could make any heart tremble. Yet, the country is not at war. More than 8,741 arms and 7,014 pieces of ammunition and 164 loaded magazines for AK 47 rifles were recovered from various criminal hideouts in Anambra, Edo and Rivers states, according to recent media reports. At the country's seaports, Customs officials routinely seize containers bearing illegal weapons. What is intriguing is that many of these weapons are of high-calibre, found only in military and police circles.

That weapons such as AK 47 rifles, MG rifles, magazines, rocket launchers and grenades are in wrong hands ahead of the 2015 elections is foreboding. The Niger Delta militants and Boko Haram terrorists in the North evolved from such circumstance. The two groups, creations of desperate politicians, were used and left in the lurch after elections.

A former vice-president, Atiku Abubakar, in the Hausa Service broadcast of the BBC radio, in 2013, confirmed this much. He stressed that some governors in the past provided money for this purpose. 'I met and told them (governors) that if they used them and after winning the election, they failed to provide them with jobs, they would rise against the people in their states,' he recalled. Are these villains in the garb of politicians at it again?

More than serving as a vile tool for realpolitik, the illegal arms explosion means an upsurge in criminal activities such as robbery, kidnapping, gunfights with the police, clashes among criminal groups such as the commando-like invasion of some streets in Mushin, Lagos State recently by street gangs, that resulted in killings, maiming of people and destruction of property.

In the North-East zone, the military have been in full combat gear since May 2013, against Islamic terrorists, seeking to quell their murderous rampage. The February 5 tragedy where gunmen killed 83 persons in Plateau, Kaduna and Yobe states, and the murder of 146 persons in Gwoza Local Government Area of Borno State on February 16, are proofs of their resilience, underpinned by the size and sophistication of their weaponry.

This gun riot, common in Somalia, Libya, Mali and Central African Republic, and now Nigeria's lot, is a symptom of a failing state. In climes where focused leadership reign, proactive response, as soon as the signs begin to manifest, would have helped to keep the phenomenon in check.  In 2012, the Chief of Army Standards and Evaluation, Shehu Abdulkadir, a major general, had raised the alarm that 70 per cent of the 10 million illegal weapons in circulation in West Africa, were in Nigeria.

Undoubtedly, the picture has worsened since then. The violent turn of the Arab Spring in Egypt and Libya, insurgencies in Somalia and other countries have promoted arms smuggling by al-Qaeda affiliates in the Islamic Maghreb, some of which have ended up in Nigeria. Lamentably, our borders remain porous. There are 1,497 identified illegal routes into the country, according to Interior Minister, Abba Moro. If 13 containers laden with illegal arms could be intercepted at a Lagos port by Customs officials in 2013 - and similar seizures are made often - and at the Port Harcourt port, then the security challenges posed by these illegal routes are better imagined.

Besides the recovered guns during the police raid in Anambra State, 182 suspected kidnappers and 181 robbers were also arrested. Buoyed by this, the state's Commissioner of Police, Usman Gwary, said, 'I have warned my officers not to handle land matters….We have to face criminals who have been terrorising the state and we have been able to arrest them.' The point is that the police are not incapable of producing results when focused. Alas, their illegal duties, as Gwary inadvertently hinted, vitiate their competence to enforce law and order.

Illegal arms have proliferated out of Libya. A United Nations Panel of Experts on Libya, studying illicit transfer of weapons, says that following Muammar Gadaffi's ouster in 2011, arms left 'Libya to 12 countries' in the North African region and West Africa, in the 12 months preceding March 2013. As normalcy returned, arms now flow out through Facebook accounts. One of such online sites with 14,000 visits as of last October, displayed phone numbers for contacts.

Appalled by the quantity of recovered arms in the three states, the Police High Command has ordered an arms mop-up across the federation. But will its gain endure as robbery suspects in police custody are sometimes let off the hook in exchange for money? Many of the robbers return to their trade more deadly. Those unlucky to be found in police net again have confessed to being jail birds.

Attitudinal change, therefore, is needed in the police.