'Nigerians Have Been Loyal To Moneygram' 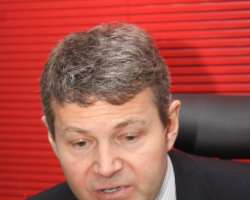 MoneyGram's Executive Vice President, Europe, Africa and Emerging Channels, Carl-Olav Scheible, recently led high-powered delegation of the company's senior executives on a week-long visit to Nigeria. The visit was also to mark key achievements by MoneyGram Nigeria in its 17 years of existence. At an interactive session with select journalists, he speaks about the company's activities and plans for further growth in the country. Excerpts:

About MoneyGram
We are a US company headquartered in Dallas, Texas. But really it is a global company. We have the ability to send and receive money in over 200 countries. We are the global no 2, the strong no 2; the fastest growing no2 remittance player globally. We have 330,000 agent locations, almost 30 offices around the world with three here in Africa- we are going to open the fourth one- and we have about 2,500 employees working at MoneyGram in order to bring this service to the market. We have agent partners different from country to country; we work with post offices around the world-over 30-35 post offices globally including the UK Post which is a big destination of money that is sent to Nigeria. We also work with major banks all over the world including here in Nigeria. We work with major retailers in the UK, Tesco, in the US Walmart,. You can work into Tesco or Walmart and send money to Nigeria. So that is the different agent profiles that we have and we continue to grow and expand our network including alternative channels.

Major competitors globally and in Nigeria
The first one is the informal sector because clearly that is the form of competition that was there first and it is one that is unfortunately quite often used still. I say 'unfortunately' because we have all heard stories about people losing money because of the informal sector, they trusted it and somebody disappears with the money. That is the main competition. Then you have the formal competition and the biggest one and amongst those id bank-to-bank transfers. Those two together are the two biggest competitors. Then we have MoneyGram and some other players who are competing in the formal market. It provides reliable and immediate money transfer which is why it is so successful because we try to offer the assistance that the informal sector does not offer.

When formal players came into the market
Global money transfer companies such as MoneyGram really go back several decades, 30, 40 years ago in one shape or another. Now obviously, it is only, I would say, that in the last five or ten years, that MoneyGram has really become a global company. It started out just in the US, then just from the US to a handful of countries. And only last year we added five new countries to get to over 200 including one in Africa-Equitorial Guinea- which we opened up for money transfer services only in December. So that is how long it has been. But even in that time, it is an evolution. And like we said earlier, traditionally it has been cash-to-cash and now the next evolution for somebody like us is to say, in addition to cash-to-cash, for instance in the informal sector, it is 100 per cent cash-to-cash, here we think about innovation, we think about the phone, we think about online. It is an even more secure and reliable service because cash is not involved.

There is a difference here when somebody uses my phone. There is a different reality but it is not a cash-based reality. So we are driving the innovation self service of Automated Teller Machines (ATMs), of phones, of online. I think in the next five or ten years especially in places like Africa, this will be a big change in how people move money. I think we will play an important role in this different and new way of remitting and moving money. We try to achieve our objective based through our network; we have around 4,000 locations in Nigeria. For instance we work through banks. In Nigeria, of course, you have to be a financial services institution to operate in this market.

And I think the trusted names and brands of our partners in addition to our name, is also very important. So we are working with all the major banks in Nigeria: First Bank, Skye, Access Bank, UBA and on and on. Those are trusted, established institutions which people know so you have the power of two brands in that network which is very important to differentiate against the informal network.

Furthermore, by bringing two brands together means that we can work on actually cross selling; so it is a very powerful combination. For instance, we had a meeting this morning with FCMB which is a new agent for us in Nigeria. Only 10 per cent of the Nigerian population has a bank account. Of course it is in the interest of the government, of the CBN and of the banks and of the people to have an account, to have the security of an account. So when somebody sends cash from the US, from the UK, to Nigeria, and the person is unbanked, how can we work together with the banks to get them to open a bank account and maybe offer other services? So it is all linked and it is all formalizing and improving the lives of consumers across the country.

Importance of remittances to developing countries

There have been a lot of things written on that. There are several ways in which remittances contribute or help to contribute. First of all, the contribution is done by the people in the diaspora who live and send the money back. We are an enabler but really that money is what gets to help a lot of countries in several ways. But I will identify two: the first one is that we have done a lot of studies and we know that that money goes mostly for things like education, school fees or otherwise to help people put bread on the table, I should say. It is also helping for medical emergencies or sometimes for special occasions such as whether it is funeral or religious events. So it is almost like a memorable event in an individual or a family's life, is an occasion for transferring money. So that is one way that really helps the people receiving the money. The second way is more on a macroeconomic level because it is sent from outside, it is collected in

naira in Nigeria but the institutions that we work with use it as a source of hard currency including the country as a whole to then be able to enable their customers to import merchandise from the outside world. So it is one of the sources of hard currency for Nigeria alongside natural resources and others. There is also a third way in that we try to give back to communities as much as we can. We have many Corporate Social Responsibility (CSR) programmes across the country. For instance we run the Girl Child education scholarship scheme. That ran for the last four years.

Major countries from which money is remitted to Nigeria and Africa.

The US is an important place that money comes from; not only to Nigeria and Africa but also globally. This is because of the size of its economy and it is also a nation of immigrants. The UK is obviously also very important because of the ties between Nigeria and the UK. But it is really where ever the Nigerian in the diaspora has travelled both to neighbouring countries in Africa but also abroad: Italy Spain. Canada is also very important. Basically there are two big groups – Western Europe and North America.

Impression of the Nigerian market
We love Nigeria. But more importantly, Nigeria loves us (general laughter). And the reason is connected to the pillars of our growth. One of them is the brand. And if we look at the strength of the MoneyGram brand, clearly, in terms of the awareness, which is one of the measures, we are very close to 100 per cent awareness which means that MoneyGram is a household brand name. And it is something we can take for granted because everyone knows MoneyGram. Cleary, Nigerians have been very loyal and kind to MoneyGram. But you can describe the situation as the glass half full but also half empty.

We have a lot more to do here and we believe that the sheer volume of money sent to Nigeria and the continued migration of Nigerians (Nigerians like to travel for business opportunities and for adventure) make it a great place for us. We talked about North America and Europe being the places from where the most remittances are received but we forgot to talk about the third one which is Africa itself. We have seen a lot of growth in such places like South Africa, where there is a big Nigerian community and other places in Africa because we know that anywhere you go in the world, you would find Nigerians. So there is a lot more growth opportunities and that is why we have an office here, we have a full team dedicated to the Anglo phone West African market. We have been here for years and we are here to stay. Clearly, we are very optimistic about the opportunities here.