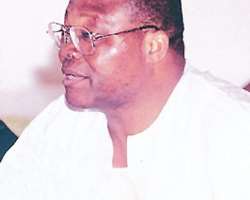 
Major General David Jemibewon (rtd) has taken a swipe at  Nigeria's  politicians, saying they are dishonest and materialistic. Jemibewon, who made the declaration in an  interview with Sunday Vanguard  at his country home in Aiyetoro -Gbede, Kogi State, said the present crop of politicians does not have  the interest of the country at heart.

'The problem with this country is that Nigeria's  politicians are dishonest. Both the ruling party and the opposition are not honest. You see elderly men, whom you respect before, saying the kind of things they say, you become sad. And worse  still is the manner they talk', the former Minister of Police Affairs said.

He continued, 'Materialism is another problem with the country. No member of the present crop of politicians has the interest of the country at heart; their personal interest overrides the country's interest. No matter how you want a change, some persons will not allow you. Those benefiting from the system are those who do not want this country to develop. They make sure the system does not support the right change.

The one-time governor of Oyo State said development must start from the state level to reduce the tension  at the federal level. 'We must develop through the state. Each state should have its own police and, if not feasible  now, it can be zonal or regional police. Those saying we can't leave the police at the mercy of  state governors  can at least be pacified that no single state governor can control a force organized at regional level.'

He, however, said the PDP can still salvage the situation if  the present leadership of the party can toe the part of truth; 'otherwise; it will be a difficult situation for the party in 2015.' He said the furore over the eligibility of President  Goodluck  Jonathan to run in 2015 is not necessary as the country's  Constitution and the PDP Constitution allow him to run.