COLOMBIANS TO VOTE IN LEGISLATIVE ELECTIONS 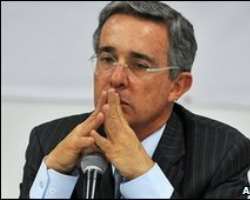 President Alvaro Uribe said he trusted the polls would be peaceful

Colombians are to vote in legislative elections, seen as a barometer for the presidential election on 30 May.

President Alvaro Uribe cannot run for a third term and a court last month closed any possibility of changing the constitution to allow him to stand.

But his coalition is aiming to keep its majorities in Congress. Some 150,000 troops are guard polling stations.

At stake are 102 Senate seats and 166 in the Chamber of Deputies. More than 2,500 candidates are standing.

On the eve of the poll, President Uribe said he trusted it would be peaceful.

Primaries are also being held to choose the presidential candidates of the Conservative Party and Green Party.

Colombia is regarded as having one of the most solid democracies in Latin America, says BBC Mundo's Hernando Salazar in Bogota.

There have been uninterrupted elections over the last five decades, despite an internal armed conflict with rebel and paramilitary groups and the activities of drug cartels in the country.

The authorities and independent electoral observers say that the risk of violence is low, especially compared with 1990 when four presidential candidates were murdered before election day.

However, the country's Ombudsman and election observers believe that around a third of municipalities are at some sort of risk, either from violence or fraud.

Ivan Cepeda, a human rights activist who is running for a seat in Congress, told BBC Mundo that he had faced difficulties in campaigning in poor areas in the capital, Bogota, “because of paramilitary groups”.

“The drug cartels have already invested a lot of money to try to get their candidates into Congress,” he told BBC Mundo.

“But civil society and the political parties are [now] more alert to this,” she told BBC Mundo.

The Colombian government says it is doing everything within its means to guarantee the security and transparency of the legislative elections.

Correspondents say that these legislative elections will give an indication of how much influence Mr Uribe's coalition still has in Colombia, despite his not being able to run again for office.

The former defence minister and close Uribe ally, Juan Manuel Santos, is the coalition's presidential candidate and is currently leading the opinion polls.

But Sergio Fajardo, a former mayor of Medellin, has been closing the gap, according to recent surveys, ahead of a field of several other candidates.