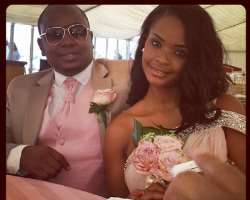 Some days back, It was reported that BBA winner Dillish and her boo Stephen had broken up and that she might be having an affair with Flavour, well Stephen has opened up to the Namibian Sun where he gave reasons for the breakup in December...according to him, they had argued about his infamous flirtatious SMSes he sent to a Nigerian woman and got her pregnant but denies the story, Dilish can be really jealous.

He narrates their sour affair “It wasn't about money. It's just that we both agreed that we are better apart. Dillish isn't just physically beautiful, she is also amazing and I respect her,” he said “While Dillish was on the show, there was a Nigerian woman who was helping to campaign for people in her country to vote for her. I was in contact with her because I helped with the campaigning.”

He confessed finally. “We flirted via text messages and so on. I mean all guys flirt, it doesn't mean you intend on acting on it. She then sent a snapshot of our conversations to a friend of Dillish, who eventually sent it to Dillish.”

We had an argument about that, which led to an argument about other things and we both said some things that we wish we didn't. After that we decided to break-up and haven't been together since December.We both need our privacy, we love each other”

But denies impregnating anyone, “I was shocked when I heard that I impregnated another girl and that I have many other kids. I have a ten-year-old boy. This alleged pregnancy is just untrue" and about rumours that Dillish is dating Nigerian singer Flavour N'abania, “I doubt Dillish is seeing Flavour, but if she is, then it won't be to spite me. Dillish isn't a spiteful woman. It's not her kind of thing.”