Tunde and Wunmi Obe Back After 4 Years Break 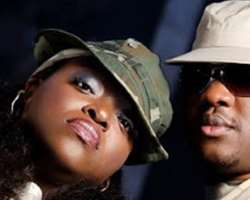 
Tunde and Wunmi Obe (TWO) have blazed the trail as one of the best couples in the entertainment industry. They have been doing well for themselves in and outside the industry in the last 26 years of coming together as one.

Tunde and Wunmi have released fantastic songs such as sonbi, Fine Bara, Two Legit and many more. However, they've gone off the scene after the release of Two Legit album in 2010. But they are now set to bounce back.

Tunde and Wunmi have been in their multimillion naira studio in the last five months, recording songs for a 15 tracks album.

And this may be their best album ever based on the professional hands employed to work with them on the album. The songs have the likes of 2face Idibia, Segun Obe, 9ice, Dammy Kraine, Davido, Teniim and Mazi Floxx featured in some of them. Some of the tracks are scheduled to drop this month.